Legal and human rights groups condemn the heavy-handed, policing response to a public health emergency, rather than the much-needed support communities need to prevent COVID-19 transmission. We stand in solidarity with the 3000 people in hard lockdown.

The deployment of hundreds of police and the coercive measures across public housing estates in North Melbourne and Flemington is a discriminatory response to the prior failings of the Victorian Government. This includes the failure to provide adequate public housing, translated health information, and culturally appropriate health care.

Announcements made on 7 July 2020 do not change the circumstances for residents, provide any certainty on when police will be removed or when the “Detention direction” will cease.

A media release from Voices from the Blocks has called for the withdrawal of police from the public housing towers, for Stage 3 restrictions to be in place instead, infection prevention measures, local testing sites outside of the towers, and for effective coordination to ensure food, medical, financial, mental health and social service needs are met.

Up to 500 police officers per shift and officers stationed on every floor is unnecessary and unacceptable. This will cause further distress and trauma for residents, given the experience of violent and racist policing of Aboriginal and Torres Strait Islander people and communities of colour.

The covidpolicing.org.au website has found that interactions with police regarding public health restrictions have left individuals feeling frightened and intimidated. Legal and human rights organisations have raised several times the concern that the policing of public health restrictions are felt hardest by communities that are already over-policed and marginalised.

The reported lack of notice, information, consultation and communication with public housing residents prior to the restrictions being imposed is contributing to ongoing confusion amongst residents and community care providers. In contrast, residents in the neighbouring buildings received almost 8 hours notice before going into lockdown. This respect and kindness was denied to people living in public homes.

It is deeply concerning that the Victorian Government is failing to coordinate and cooperate in the distribution of basic needs for residents including food and medical supplies. This includes a severe shortage of hand sanitiser and the need to make communal facilities safer.

Policing or punitive responses to this crisis under the guise of ‘public safety’ only exacerbates the health and societal harms endangering the communities who are already most at risk.

When private apartments across the road from public homes experiencing the worst lock-down in all of Australia are not subject to the same restrictions, we need to ask important and serious questions about issues of racial discrimination and the justification behind these responses.”

“We must question how we got here — how was it that the calls from communities weren’t heard and acted upon months ago? Now is the time to centre those voices and listen to the calls from residents under hard lockdown.

In times of already heightened stress and anxiety under the current pandemic, we know that minority communities were already experiencing increased isolation and this punitive response has only highlighted the growing inequality and structural barriers that exist in our society.

Our focus now should be to support minority communities during this time and amplify the voices of those experiencing hard lockdown.”

“No other communities in Victoria have been policed like this and we should not ignore the fact that many of the communities that live in these towers are also those that report historical and continuing overpolicing, racialised policing and criminalisation.”

“There is no evidence that punitive policing and heavy use of fines has had any positive impact on public health outcomes. From the minimal data that has been released, we know that fines have been disproportionately received by those who can least afford them.”

“Whilst we are being told that the police are there to stem the spread of this pandemic, history shows that too often prioritising a policing response leads to marginalised groups being disproportionately punished. Aboriginal and Torres Strait Islander people, people living with a disability, and people from migrant backgrounds are too often hardest hit. It is crucial that police take an educative, compassionate and sensitive approach with the assistance of interpreters in their engagement with our community members. The primary goal being to help and assist, rather than target and criminalise.”

“Instead of working in partnership with community to prevent transmission, the Government has effectively criminalised entire buildings of people. It not only intimidates, it humiliates. This remains a public health emergency–not a crime wave. Policing in this way is an unnecessary and blunt tool.”

“Residents have been telling us that the response is discriminatory, disproportionate and there has been a failure in the Victorian Government’s ability to provide basic necessities so people can sustain themselves. People are worried about access to fundamental necessities such as clean air and exercise, culturally appropriate food and health care. Vulnerable individuals are struggling with nothing more than a helpline number that is not very accessible to non-English speakers. “As a result community-led and neighbourhood initiatives with support from local businesses, community groups and friends, are striving to fill the gaps which the government has created by this ill considered intervention”

“Policing should never lead the solution to a public health crisis. Any responses in a pandemic should be led by healthcare professionals – like we’ve seen in wealthy suburbs like Toorak, and aged care facilities. Families, the elderly, refugees, migrants and First Nations people need practical support and information, not a heavy-handed police presence.”

“This lockdown is rife with discrimination against First Nations people, migrants, refugees and those living in social housing, who already face disproportionately high rates of over-policing.

To send in 500 police officers as a first response to a public health crisis – while the rest of the community is treated so differently – is not how this should have been
handled. We stand in solidarity with the people and communities inside the buildings calling for fair treatment.” 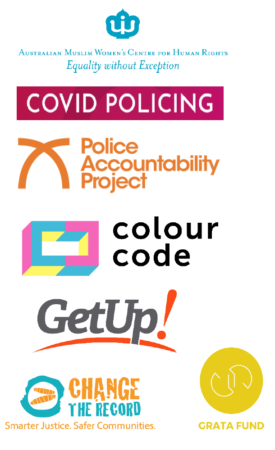