A six-year court battle against racism

A Victorian Supreme Court judgement has found that Kwenda Obudho was the victim of racial discrimination by a popular Melbourne nightclub.

Mr Obudho is a DJ who had his event cancelled by the venue at the last minute on the basis of the race of the people attending.

In 2011 Obudho organised an event called Africa Fest. Five days before it was due to take place Inflation nightclub cancelled the event when they discovered that the majority of patrons would be of African descent.

”I did not want to see the cycle of racism continue and so I have made a stand,” said Mr Obudho, the Appellant. “I know that a lot of people have been in this position.”

“I am a full time professional DJ. Whenever I host events where the patrons are white I don’t have these problems – it is only when I have organised African music events that I face these issues.”

“I hope the message to venues is that the time has come where people will stand against any form of racial discrimination, whether it’s via booking functions or entry policies.” Mr Obudho said after he left the court.

“After 6 years it is a relief to have the Supreme Court acknowledge this in such a strong judgment.” said solicitor Nick Boag from Flemington & Kensington Community Legal Centre.

“Our client has had similar experiences on a number of different occasions, but in this case has taken the matter further,” he said outside the Supreme Court.

“This decision puts all venues around Melbourne on notice to ensure that their entrance policies don’t discriminate on the basis of race,” said Mr Boag.

The Supreme Court handed down the decision last month [February 2017] after six years of legal action through VCAT and to the Supreme Court. The judgment held that Obudho was successful on all points of the appeal.

Media on the case

“It was supposed to be a celebration of African music, style and culture at a popular Melbourne nightspot…”

DJ wins six-year racism battle against Melbourne nightclub after they cancelled his event because it was African-themed Ashleigh Davis, Daily Mail Australia, February 12, 2017

“A MELBOURNE nightclub that cancelled an African-themed night discriminated against the event’s organiser, a court has found.  A Victorian Supreme Court judgment ruled that Kwenda Obudho was the victim of racial discrimination by Inflation nightclub… 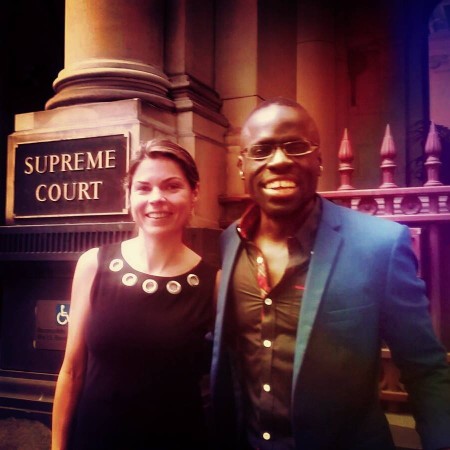 Outside the supreme court of Victoria after the landmark historic win with my super Barrister Ms. K Grinberg.

On Thursday 9th February 2017, the Supreme Court judge made a landmark final ruling and found Melbourne Nightclub ‘Inflation’ guilty of racial discrimination when they cancelled one of our Afrodownunder events because of our race.

In October 2011, I on behalf of Afrodownunder, booked to hold an event at ‘Inflation’ through music agency iDJS Entertainment.

However, just 5 days prior to the event, Inflation’s management cancelled this event, refusing to host it “due to the fact that the majority of patrons would be African”.

Since 2007, our community organisation, Afrodownunder has been embracing, engaging, uplifting and strengthening our African communities here in Australia through the co-ordination of events and community activities.

As a full-time professional DJ for predominant anglo corporate and private events, I had observed a glaring absence of quality events catering to the African communities. As such, I stepped-in and the co-ordination of Afrodownunder’s events were ultimately founded, starting from humble beginnings but soon expanded to encompass the mounting interest and immense attendance at our social gatherings.

The events incorporated nightclub, family and other social events which embraced all Africans and friends of Africa in Melbourne, across Australia and even internationally, and though it would have been everyone’s ideal to hold these events frequently and far-reaching, they needed to fit around the demands of my profession and constraints of the booking/venue processes. All in all, the course of the consistent organisation of these events were not always without difficulty, but the importance of fostering a sense of community far outweighed the challenges we faced, not unlike that which ‘Inflation’ thrust to us when they cancelled our event because we were African.

And so began our path to defend our collective fundamental human right of equality and pursue justice on behalf of Afrodownunder and our wider African communities. We initially endeavoured to have the matter formally addressed through the Victorian Equal Opportunity & Human Rights Commission, however these proceedings were deemed unsuccessful by that board as Inflation failed to uphold their responsibilities stemming from the conciliation process.

In our vehement commitment to defend equality and advocacy for fellow Africans, we sought legal representation through Flemington and Kensington Community Legal Centre (FKCLC) and escalated this matter to the Victorian tribunal. We embattled through 2 and a half years of arduous legal proceedings to have our case formally heard in a 3 day tribunal hearing in April 2015. It took a little over 5 months for a ruling to be made, which the tribunal member delivered in October 2015 where she favoured our testimonies, slammed those of Inflation labelling some of their accounts as “inconsistent, grossly exaggerated and unbelievable” and ultimately ruled that Inflation were guilty of racial discrimination.

Though we received a positive outcome through VCAT’s ruling, there were aspects in that ruling which our legal team believed the law had not been applied to its fullest extent, and as such we appealed to have the matter heard in the Supreme Court, which was held in July 2016. And when the final ruling was passed down on the 9th February 2017, we achieved yet another momentous, and now ultimate, result!

It’s been a long road to justice, but the time has come where people are coming together to stand against any form of racial discrimination; no longer will we remain passive and allow the cycle of racism to continue. I am in a privileged position as a professional DJ to attend many venues to provide a platform of entertainment and engage diverse crowds, and it has become glaringly apparent that I only observe or experience racial confronts and venue/administrative conflict at African and African-related events. The Supreme Court decision surely
now puts all venues on notice that their event booking processes and door policies should not, cannot and must not discriminate on the basis of race.

Once more, on behalf of Afrodownunder, I would like to extend a deep and sincere gratitude to those who courageously stepped forward to support the cause. A very earnest thank you of course extends to our legal team who worked tirelessly with us to achieve this honourable and historic outcome; namely our barrister Ms Krystyna Grinberg, our team of legal counsel including Mr Nick Boag, Mr Matt Wilson, Ms Tamar Hopkins and Ms Sophie Ellis (all hailing from FKCLC), as well as Erin, Julian and all the other legal volunteers who gave their time to support our cause. And not least, thank you to Bruce McNab who has been a strong advocate for the cause in every capacity from the beginning.

Once again, to my fellow #Africans, and to anyone who ever experiences any form of discrimination or other injustice, I hope the perseverance and resilience we have shown throughout this fight for equality empowers you to find the courage to confront and overcome your own struggles. Do not be deterred by the unknown journey, what-ifs or the nay-sayers!

Stay resolute in your stance and know you deserve nothing less than the exact equality that we assuredly are all entitled yet sadly some denied, and may integrity be at the heart of our common pursuit for all that is right and just.

And so the beat goes on…