Australia has a long history of tolerance to and recognition of the right to protest as a legitimate form of political expression. In Law, Liberty and Australian Democracy, Gaze and Jones write:

Public assemblies are essential to the proper functioning of democracy, in situations ranging from election and political party meetings to demonstrations organized to protest about government policies or other issues. The right of public assembly is significant not only for political reasons, but also as an important aspect of respect for individual autonomy, because without the right to express views in public and to call public assemblies for this purpose, the right of the individual to selfexpression is very limited. The right of public assembly gives the individual access to a public forum for expression of views and provides a mechanism for individuals to take action as a group. The right to assemble is closely based on the rights to freedom of speech and freedom of association.  1

The right to protest is affirmed by a number of human rights.  Australia has ratified the International Covenant and Civil and Political Rights (ICCPR), which includes the right of freedom of peaceful assembly and expression, and prohibits arbitrary arrest and detention and cruel treatment at the hands of the state. The right to engage in participatory democracy ‘without unreasonable restrictions’ is clearly acknowledged by article 25 of the ICCPR. Notwithstanding this, the rights of protesters in Australia have been violated in many protest situations, and police in Australia have used arbitrary arrests and detention, special bail conditions to deny rights to peaceful assembly and other actions which contravene international law.

Protests are an important part of our participatory democracy. If activism and peaceful protest are under threat, so are human rights. Promoting and protecting all human rights, including the right to protest, is an important and valuable undertaking.Police  actions place limits on our civil, political and other human rights.  For instance, many actions that police take against a person can affect that person’s freedom. Police officers have been given special permission under common law and statute to use force in limited circumstances, such as to effect an arrest or prevent crime.

The use of force by police officers may be unlawful if it is not justified at all in the circumstances of the protest or demonstration. It may also be unlawful if the amount of force used is excessive and dangerous.

In many cases, the interference with our human rights may be permissible and have a sound policy, legislative or legal justification. The restrictions they impose may, or may not, be necessary and appropriate in a free and democratic society.

Because police action can limit or restrict human rights, it is mandatory that any interference be justified. In order to justifiably limit human rights, police actions and methods must be: explicitly authorized by law, carefully scrutinized to ensure they continue to be absolutely necessary and justified in a free and democratic society; thoroughly monitored, documented and supervised; and subject to review by a fully independent complaint and investigation body as well as the courts.

Police authorities cannot justify or rationalise abuses by pointing to the poor conduct of some protesters. Experience from many parts of the world indicates that authorities can become increasingly punitive in the face of civil unrest and the observance of important human right considerations are given less of a priority by individual officers and police command.

It is well established that the protection of human rights of individuals, as well as the person’s dignity, must be observed despite the behaviour or criminality of that person and whether or not that person is in custody. In our view, the maintenance of appropriate police protocols, lawful actions and consideration of human rights becomes more important during times of stress and political conflict. As stated by Amnesty International, exceptional circumstances such as a state of emergency or any other public emergency do not justify any departure from basic human rights standards for law enforcement officials.

Excessive and unlawful levels of violence by state security forces remains one of the primary impediments to civil and political rights throughout the world. It is incumbent upon Victoria Police, as well as federal police and security bodies, to demonstrate that as institutions they are capable of managing politically motivated demonstrations without recourse to actions that contravene fundamental human rights. 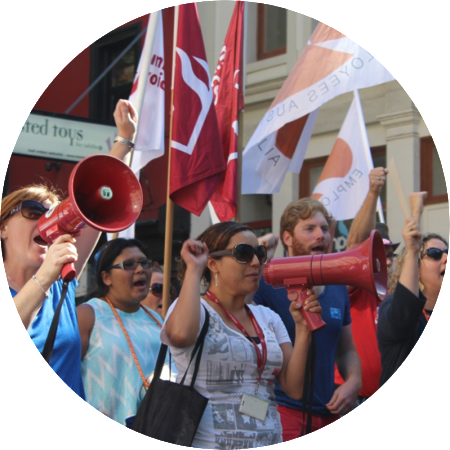 We are also a part of Melbourne Activist Legal Support (MALS) which supports activists to defend their own civil and political rights though the provision of training, resources and up to date information on the rights to protest in the State of Victoria.

MALS can provide direct legal support at major demonstrations: monitoring police engagement with protesters through the deployment of Legal Observer Teams if and when capacity allows.

The Flemington and Kensington Community Legal Centre has lodged complaints with Victoria Police on behalf of the protesters who brought parts of Melbourne CBD to a standstill on July 18.

In 2014 this centre spoke out strongly against the move-on powers contained in the Summary Offences and Sentencing Ammendment Act introduced by the Napthine government.

These move-on powers were repealed by the Andrews’ government in 2015.

According to MP Jennifer Kanis, Member for Melbourne,”This bill increases the gamut of what an unlawful protest is. In our view that is not acceptable. In Victoria and in any democracy people have a right to peacefully and forcefully express their views. It is quite interesting that this bill is being brought in at a time when this government is facing more and more protest on the streets about its agenda. We are seeing the rise of community action against this government because the community is so disgusted with what is happening. It is telling that this bill attacks the basic democratic right to protest.

I would like to read a quote from a submission by the Flemington and Kensington Community Legal Centre to the Scrutiny of Acts and Regulations Committee in relation to this bill because it articulates what is at stake. The submission says:

Where violence or aggression has occurred during protest activity —

and I emphasise this —

police already have an array of offences available to charge if they deem appropriate.

Victoria is free from the sorts of political violence associated with less free, more authoritarian and non-democratic countries elsewhere.

We have [been] successful in balancing concerns about disruptions and violence during protests with the right to freedom of movement, freedom of expression, peaceful assembly and freedom of association so far in Victoria.

Nonviolent interventions in all their forms are the last form of protest action for Victorian citizens who feel that, according to their conscience and beliefs, they need to make a stand and put their bodies, as it were, ‘on the line’.

We may not agree with all of the reasons for a particular protest and we can argue the facts back and forth as any good democratic society should. But generally, and as history has most often proven, they are good and courageous people, and if we criminalise the option of intervening in an injustice occurring, we reduce the role of these brave people throughout our history who have dared stand up to greed, destruction, injustice or exploitation.

In my view the Flemington and Kensington Community Legal Centre in its submission captures the danger of this bill. We are a free and democratic society in Victoria, and we do not want to see the struggles that occur in societies in which people are restricted from protesting. This bill goes too far.

We have all been inconvenienced by protests, student occupations, rallies or protest marches through our streets, but this bill suggests that inconvenience is too great a price to pay. I put it to you, Acting Speaker, that that inconvenience is a good price to pay for a community and a society that allows people to express their views. That temporary inconvenience is something we need for people to have their voices heard. It is okay for us here in Parliament; we can get up, say what we like and have our voices heard, but many people in our community do not have that opportunity. The only thing they can do is protest.

This centre a long history of support for the protection of protest rights and the scrutiny of public order policing in Victoria in conjunction community, legal and human rights bodies throughout Australia.

The Legal Centre organised and ran the G20 Legal Advice line in the lead up to and during  the large G20 protest event held in Melbourne November 2006.  Callers to this 24-hour line were provided with basic legal advice by solicitors and subsequently referred to Western Suburbs CLC, Fitzroy Legal Centre, St Kilda Legal Centre and Rob Stary & Associates for ongoing legal assistance.

In 2013/14 the Police Accountability Project made submissions to the Scrutiny of Acts Committee regarding our strong concerns over police move-on powers contained in the Sumary Offenses and Sentencing Bill (2013).