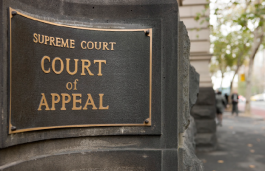 The judgement can be found here.

Ahmet alleged he had been assaulted by police officers, and he sued the Victoria Police for damages. In the court proceedings Ahmet subpoenaed documents about the defendant police officers’ complaint histories. The Victoria Police claimed public interest immunity as a basis for refusing to discover the documents. The Flemington and Kensington Legal Centre (FKCLC), acting for Ahmet, successfully defeated the immunity claim in the Supreme Court of Victoria Court of Appeal.

The plaintiff (Ahmet) complained he had been assaulted in the course of arrest by four police officers in October 2004. Ahmet alleged that assaults took place during the arrest and later when he was transported to the police station.

In May 2013, the plaintiff brought an action against the four arresting officers in the County Court of the Victoria for false imprisonment, battery and malicious prosecution.

FKCLC served a subpoena on the Chief Commissioner of Police for the production of certain documents as part of interlocutory proceedings (County Court Civil Procedure Rules 2018 R.42A.03.1). The subpoena sought discovery of the complaint and disciplinary histories of the four police officers who had arrested Ahmet. Ahmet argued this material would be relevant to the credibility of the police officers, and to support his argument that there was a tendency for those police to engage in the impugned conduct.

Judge Misso found for Ahmet on the first ground. His Honour held that Ahmet sought the documents for the legitimate forensic purpose of arguing that the police members’ conduct was not a coincidence

On the question of public interest immunity, the police relied on an affidavit by a senior officer in their Professional Standard Command (PSC). The affidavit argued that release of the documents would disclose details of PSC’s confidential investigative processes, and would discourage the free and frank exchange of information and opinions essential for the proper investigation of complaints.

Judge Misso found the public interest immunity arguments to be ‘compelling’ and refused discovery on those grounds.  His Honour held that he would have permitted the plaintiff to inspect the subpoenaed files, but for the PSC affidavit.  His Honour did not inspect the documents in making his decision (Ahmet v State of Victoria [2014] VCC 922)[3].

Ahmet lodged an interlocutory appeal of Judge Misso’s decision about the subpoena to the Court of Appeal. Ahmet argued that the contents of the subpoenaed documents did not fall within public interest immunity, and that his Honour’s decision was subject to an error of law.

The appeal Judges, Nettle JA, and Sloss AJA, found for Ahmet. Citing the decision of the High Court in Commonwealth v Northern Land Council (1993) 176 CLR 604,[4] the Court upheld the distinction between documents that fall within:

The Court overturned the lower court’s decision on both elements. Their Honours, citing the UK case of Regina v Chief Constable of the West Midlands Police, Ex Part Wiley [1995]1 AC 274[5] held that,

‘It is clear that documents which relate to the investigation of police misconduct or complaints against police do not, as a class, attract public interest immunity.’

The Court of Appeal also rejected the respondent’s submission that the police complaint files were protected under ‘contents’ immunity. Their Honours found that the respondents,

‘do not identify, or articulate in any real or meaningful way, what it is about the contents of those files that, if disclosed in the current proceeding, would harm the public interest.’

Their Honours also emphasised that where a claim for contents immunity is argued, this will normally require the judge to inspect the documents for the purpose of making a decision as to whether a contents immunity applies.

‘The claim for immunity must be articulated with rigour and precision, and supported by evidence demonstrating the currency and sensitivity of the information, so as to constitute a compelling case for secrecy. Anything less will be unlikely to suffice.’

In summing up their Honours findings, the Court of Appeal held,

‘In our view, [Judge Misso] erred in acting on the basis of the general statements made [in the PSC affidavit], rather than inspecting the subpoenaed documents for himself and forming a view about whether any damage might result from the disclosure. In the absence of his Honour having a good appreciation of the substance of the information… no proper weighting of the merits of the competing claims could be undertaken.’

The matter was remitted to the County Court for reconsideration.

The County Court did inspect the documents upon reconsideration, and reversed its earlier position, now finding that the documents should be disclosed. Judge Misso stated,

‘I consider that to refuse production and inspection of the documents would frustrate and impair the administration of justice. It would deny the plaintiff the right to rely on the statutory provisions which permit reliance on evidence of tendency and coincidence. In the end, I consider the public interest is predominantly served by the production and inspection of the documents [Ahmet v State of Vitoria & Ors (No 3) [2015] VCC 867.’[7]

The matter culminated in an outcome satisfactory to Ahmet.

The case highlights the barriers to justice faced by victims of police abuse, including the police practice of refusing to disclose their internal complaints investigations. The case undermines the claimed public interest immunity basis for that secrecy, and affirms the legitimate forensic purpose of citizens accessing the complaints histories of police whom they say have engaged in misconduct.

Ahmet affirmed the principle in Brazel, that it,

‘should provide a salutary lesson for any government official or agency contemplating a claim for public interest immunity. Since immunity will not be lightly conferred, it should not be lightly claimed…it is never enough merely to assert – as it were self-evident – that disclosure of the information in question will harm some particular aspect of the public interest. The claim for immunity must be articulated with rigor and precision.’

Ahmet extends that proposition to complaints and findings in police misconduct matters.

Less than 10% of all complaints to police are substantiated, and less than 4% of all assault complaints are substantiated.[8] While these figures reveal systemic problems with police self-investigating complaints against police, the situation is exacerbated by a lack of transparency.  Ahmet undermines police reliance upon the secrecy of its complaints investigations, and is an important win for individuals and communities impacted by police misconduct.