As part of a three-year action plan to eliminate racial profiling, Victoria Police ran a trial of ‘stop & search’ receipting during 2015. It was the first such trial in Australia.  In 2016 the trial was evaluated.

The outcomes of that evaluation are summarized here.

Police and Protective Services Officers (PSOs) issued paper receipts to members of the community in the Moonee Valley and Greater Dandenong Local Government Areas, Boroondara and Mildura (LGAs). These trials ceased in December 2015. Police and PSOs operating in those LGAs issued Receipts when they initiates contact with a member of the public. This includes where a person is asked to provide their details and no law enforcement outcome is recorded.

Flemington Kensington Community Legal Centre and Springvale Monash Legal Service worked together on StopWatch Vic, a project to inform the public about the receipting trial and their rights when approached by the police/PSOs and to independently monitor the outcomes of the trial.

Originally proposed for Victoria Police by the Flemington & Kensington Community Legal Centre and Arnold Bloch Leibler, in 2010, receipting aims to increase the transparency of policing by ensuring people who are stopped or searched by police are given a receipt setting out the legal reasons they were stopped or searched. The aim is to prevent any arbitrary and racially discriminatory stops and searches by police, as well as assisting in tracking and documenting any racial disparities in stop and search patterns.

What is “Stop & Search” Receipting?

Police only have the legal power to stop, question and search members of the public in specific circumstances.[i]

Receipting would require police officers to complete a form and issue a receipt, an administrative form to be kept by both parties, every time they stop, or stop and search, someone.

Implementing this policy requires only minor changes to existing police forms and processes. Therefore, the changes it proposes could be rapidly adopted by Victoria Police.

It aims to prevent arbitrary and racially discriminatory stops and searches by police, as well as assisting in tracking and documenting any racial disparities in stop and search patterns.

The issuing of a receipt has four benefits.

It ensures police only stop those against whom reasonable grounds exist, increasing rates of successful prosecutions per stop and reducing unwarranted harassment.

It provides people with clear reasons why they have been stopped. This increases community trust in the legitimacy of police actions.

Thirdly, the collection and public reporting of data about the race of those stopped and the results of stops would enable the public to track any racial or ethnic disparities, boost the transparency of police activities and help identify further reforms as required. If there is a problem with any members of Victoria Police using their powers in a discriminatory manner we can do more about it.

It would also save police time. British and US research indicates police waste a lot of time stopping and searching people with no justification. If stops were judged in terms of actual legal outcomes such as prosecutions, the overall number of stops could be greatly reduced, thus lowering the number of innocent people caught up in police operations, as well as the risks of racial profiling.

To truly ensure that we stop prevent racial profiling we need specific anti-racial profiling legislation, such as amendment to the Equal Opportunity Act to make it unlawful for police to discriminate against suspects/alleged suspects combined with improved anti-racism training within the police force.

Receipting is an important step that Victoria Police can take to address discriminatory policing practices and perceptions of racial profiling. 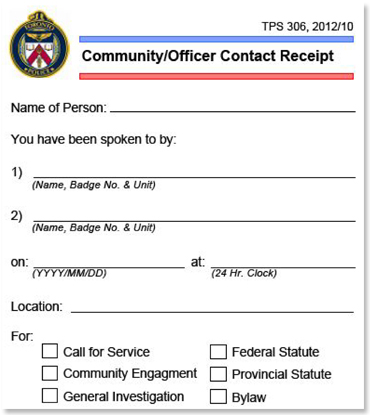 See our Research & Resources page for a list of key documents on stop and search receipting.

Five things you should know about the Victoria Police Receipting Trials