Sections of the media and the Victorian Police Association have correlated anti-racial profiling measures introduced over the past year with the policing response to the brawl in Melbourne’s CBD on the March Moomba weekend.

The brawl itself was a serious incident – obviously frightening for those caught up in it. It must be responded to effectively like all  incidents of social crime and violence.

Unfortunately,  much of the immediate public commentary since the weekend has been simplistic, mostly incorrect and ultimately detrimental.

Police have been blamed for not responding sooner and media commentators have claimed that new anti-racial profiling measures adopted as part of the Equality is Not the Same action plan have somehow ‘hampered’ police in their efforts to prevent incidents such as these. The Age editorial even goes so far as to claim that the Victoria Police ‘have swung too far in the direction of appeasement.”   Nothing could be further from the truth.

To infer that police or agencies have been ‘over-indulgent towards some communities’ is shockingly inaccurate and dangerous.

Absolutely nothing about new anti-racial profiling measures prevents or deters police from detecting, preventing or prosecuting crime. In the past, police often responded to criminal activity involving people from a particular ethnicity by indiscriminately targeting all people perceived to share that ethnicity. This was racial profiling. Not only is it unlawful it represents a huge waste of police time. It builds resentment and undermines trust in police that is critical to sound policing. Effective crime detection needs to based-upon evidence rather than bias and stereotypes.

Police can and are detecting, investigating, and making arrests based upon evidence of criminal activity.

But to blame new anti-racial profiling measures for the weekend’s brawl is not only fundamentally wrong, it implies that police should be racially profiling more. Targeting young people simply based upon their perceived race, is not only bad policing,  it will undoubtedly make thing worse.

Racial profiling, rather than being a solution to crime (studies demonstrate is clearly not) can in fact be a trigger for social unrest and violence.

Studies around the world link racial profiling, such the overuse of stop and search, as a significant factor in large scale acts of public disorder such as the London riots in 2011. Wherever racial profiling become prolific, resentment against police rises, youth become more disengaged and communities become less trusting and supportive of police.

Flemington Kensington Community Legal Centre commends Victoria Police for alerting members to its zero tolerance approach to racial profiling immediately after the brawl. Heightened media attention to ‘Africans’ or ‘Islanders’ involved in crime increases stereotypes and exacerbates the tendency to based policing decisions on bias, rather than on lawful basis of evidence. It is vital the operational police who are tasked to respond to incidents are reminded about this.

If anything, the incident on Saturday night is an argument for police to redouble their efforts towards eliminating racial profiling.

Victoria Police command know this now and have been working to shift the culture within Victoria Police that has been too quick to base policing decision on assumptions or implicit biases. Incidents of racial profiling still occur far too often.

This centre still receives serious complaints and has several cases running that indicate police have stopped people based upon their perceived race than on any other factor. There is still lots more work to be done.

Police are not “frightened” to engage with African youth. This is a rumour, often raised by the Police Association, which is designed to undermine important initiatives such as stop and search receipting that aim to stop bad policing. As they should, Victoria Police continue to work respectfully with community leaders and communities around local issues. Individual police members should continue to be trained to make decisions based upon evidence and ‘reasonable suspicion’ rather than assumptions based upon a person’s perceived race or ethnicity.

We have known for many years now that the targeting of ethnic minority youth actually reinforces a ‘climate of conflict’ in which ‘social differences and disreputable status are generated’.  (Guerra and White, 2001)

‘Old school’ policing and increased brutality will, without doubt encourage more young people to seek the safety of large groups or ‘gangs’.

To claim that recent efforts to prevent discriminatory policing, such as the new anti-racial profiling policy and receipting trials are somehow to blame for a weekend brawl demonstrates how little most people understand about these issues and how far we still have to go.

Catapulting Race as the ‘cause’

People naturally search for the causal factor after incidents like this, trying to understand why it happened and looking for a solution.

It is sad that many jump to the most simplistic and most often wrong answer – and by doing so, end up making complex social problems far worse.

Race has been catapulted as the primary factor in the incident by newspapers, bloggers and commentators such as Neil Mitchel on 3AW and predictably, this has fed into the growing far-right anti-immigration sentiment. Social media is awash with extreme racist chatter blaming immigration and multiculturalism.

The overwhelming focus on race or ethnicity immediately overshadows all other far more important causal factors. Masculinity, unemployment and poverty, cuts to social services, family breakdown, and complex and very specific youth culture issues are minimised in the public debate.  We fail to learn anything useful when the focus is predominately on ‘race’.

As above-  the near constant association between race and crime makes the task of police, youth workers, and community leaders even more difficult. 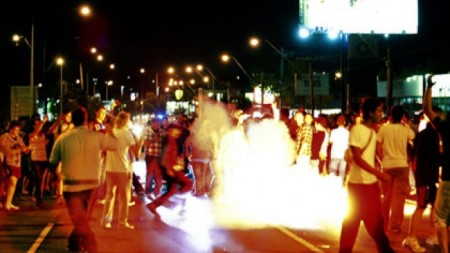 Hundreds of angry revheads take to the streets with flares in protest against the cancellation of the EasterNats race meet at Melbourne’s Calder Park Raceway. 2010 Photo: Wayne Hawkins.

It is illustrative to go back to 2010, in the Melbourne suburb of Oakleigh, when thousands of predominately young men, angry that the Easternats had been cancelled, throw chairs, attack bystanders, smash windows, torch things, overturn cars. They caused an estimate $15,000 worth of damage with levels of violence far worse than we saw during the Moomba brawls.  It blocked major streets for several hours and resulted in a huge policing operation.

Media coverage of an incident can be significantly different in cases where the ethnicity of those involved is non-white – non Anglo.

“Victoria Police’s zero tolerance policy on racial profiling has come under attack in recent weeks. Could critics of the policy have a point? Can stopping people based on a profile that includes race be justified? The research says no…

“Put simply, old-school policing is bad policing, ineffective and, ultimately, dangerous. It feeds into the growing extreme anti-immigration sentiment that is revealing itself to be a source of serious social and political conflict…

“Speculation a gang brawl in Melbourne’s CBD was the result of police going soft on African or Islander youths is “shockingly inaccurate and dangerous”, according to the lawyers behind a landmark case that banned racial profiling in Victoria…

“No journalist or editor can be unaware of the racism inherent in describing Black men as animals. Neither can responsible writers be so loose as to connect vague and broad terms such as ‘African youth’ and ‘refugees’ with depictions of chaos and criminality. And given the column-space dedicated to racial profiling over recent years, it is incumbent on the Age to provide a more complex analysis of the reforms Victoria Police has introduced so far, and the good reasons why it has done so…

Lessons from the United Kingdom:

Stop and search: the police must not revive this discredited tactic

From Brixton 1981 to Tottenham 2011, all section 60 has done is cause riots and fail to stop knife crime. It will be a tragedy if police chiefs turn back now….  An article by Michael Shiner The Guardian, 20 October 2015