I Am Not My Skin: Pasifika youth & racial profiling

Police Accountability Project > Event > I Am Not My Skin: Pasifika youth & racial profiling

Nomad recording a song for the CD

A number of Pasifika youth around Melbourne have shared their experiences, their thoughts and opinions of racial profiling and recorded them on a CD titled ‘I Am Not My Skin” that was launch on June 5th. 2017.

It can be downloaded and listened to here.

Women’s Health West held a series of workshops for Pacific Island Women as a part of their ‘Our Community Our Rights’ Program.  After learning about Human Rights, Discrimination, Activism, Legal Rights and a range of other topics a group of these women decided that they wanted to address the racial profiling of Pacific Youth in Melbourne.

Pacific Islanders make up less than 1% of the total population of Australia.  However, Pacific Island youth make up 14% of the population in juvenile detention.  Pasifika youth have spoken out and identified racial profiling at school and in the community as an issue that they face.  It is plausible that this could be a contributing factor to the over representation of Pasifika youth in detention.

The ’I am not my skin’ design features hands to show the skin we all have.  They are shaped in a flower as flowers are a big part of the Pacific.  The colour purple is to show that when we are racially profiled we are made to feel as though we are aliens with purple skin, not a human being.  The yellow heart signifies the love and respect that we hope everyone will feel as a result of this project.

This project has been organised by Women’s Health West and supported by Without Suspicion campaign by the Police Accountability Project. 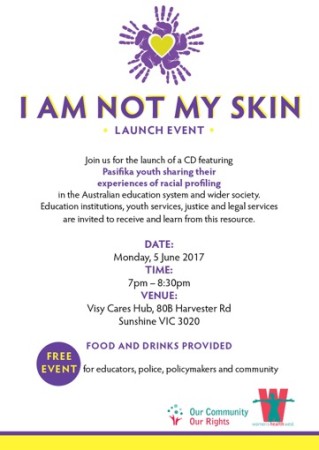 ‘I am not my skin’ can be downloaded and listened to here.

About their voices:
01. Morwenna’s Story:
Morwenna is a 38yo Samoan proud mother, aunt and businesswoman. She also participated in Women’s Health West’s Our Community Our Rights program . She is a teacher at the Polynesian Kids Community Language School.
Morwenna is passionate about community development and education.
02. Logan’s Story:
Logan is a 13yo who was born in Melbourne but has spent most of his life living in Samoa. He loves going to school, playing lacrosse and being with his brothers and cousins.
03. Lou Tama E by Mapo Taalo and Leitu
04. Marlon’s Story:
Marlon is a 13yo Maori/ Samoan basketball enthusiast who loves family and eating spicy food.
05. Lata’s Story:
Lata is a 13yo Tongan, Loves going to school as she has a mix of friends from many nationalities, she spends her free time actively involved in local Youth programs. Lata enjoys performing the art of traditional Tongan dancing called the ‘Tauolunga’.
06. Home by Adrian Narayan feat. Keanu Finau
07. Tyla’s Story:
Tyla is a 14yo Maori/ Samoan who has played basketball for Victoria, participated in the school spectacular and is the school captain of her school.
08. Damon’s Rap:
Damon aka Nomad is a Polynesian-Australian independent rap artist based in Melbourne. Nomad makes music to inspire and has been putting his life into verses since 1997.
09. Damon’s Story:
Damon is a 20-year-old Maori/ Samoan, born and raised in Melbourne. Damon loves basketball, Marvel, music, culture and family.
10. Yesterday by Adrian Narayan feat. Keanu Finau
11. Kylie’s Story:
Kylie is a 28yo Tongan woman who has lived in Melbourne’s west for over 21 years.
She also participated in Women’s Health West’s Our Community Our Rights program. She is a loving full -time
mother and a dedicated part-time student who is actively involved in the Tongan community.
12. Sajda’s Story:
Sajda is a 21yo Fijian Australian born and raised in Melbourne. Sajda is a law student who works with the Muslim community in Victoria, as well as in the Peer Advocacy Team at Flemington Kensington Community Legal Centre.
13. Frankie’s Story:
Frankie is a 20yo Tongan/Maltese who was born and raised in Melbourne’s western suburbs. Frankie works with Indigenous communities in rural Western Australia as a youth worker