Calls for Brett Guerin investigation to be released to public

Brett Guerin resigned in disgrace after he was discovered to have published deeply offensive homophobic and racist comments online under the cloak of a false name.

The Independent Broad-based Anti-corruption Commission (IBAC) released a short statement this morning (2nd September 2019) stating that their investigation had concluded. IBAC have not released its findings, but said that a special report on “leadership failures within Victoria Police” would be prepared for parliament next year.

Anthony Kelly, Executive Officer of the Flemington Kensington Community Legal Centre, said “The findings of this investigation must be publicly released. This information needs to be available to Parliament right now” Mr Kelly said. “Cabinet is currently determining whether to enact an independent Police Corruption & Misconduct Division within IBAC that would take over investigations of police serious misconduct allegations. Insights into Victoria police leadership failures are critical.”

IBAC has acknowledged that Guerin’s behaviour risked damaging the integrity of, and confidence in, Victoria Police investigations.  “It is this information that should be made public immediately” said Mr Kelly.

The Flemington Kensington Community Legal Centre previously called for IBAC to review of all complaint files about racial discrimination in which AC Guerin had involvement or oversight. Operation Turon was announced in March 2018 and set out to investigate “the extent to which Mr Guerin’s conduct, in his role as the head of Professional Standards Command or otherwise, may have affected the investigation and outcomes of matters where racism and other potential breaches of anti-discrimination or human rights law may have been relevant.”

IBAC’s short statement said they had found “no evidence of actual bias” [our emphasis] and that Mr Guerin’s conduct does not meet the standard of ‘offensive’ currently required to file charges under the Criminal Code. Nonetheless, Guerin’s pattern of behaviour whilst head of the Professional Standards Command, demonstrates why police should not be investigating themselves.

Guerin’s original promotion to the head of Professional Standards Command (PSC) after at least two formal internal complaints were made to Victoria police command suggests a culture of collusion and denial.

“We still don’t know if Guerin’s racist attitudes were known to the Chief Commissioner or others in VicPol Command at the time of his promotion. These questions will remain unanswered unless the Operation Turon findings are released,”  said Mr Kelly.

“Given the role that Professional Standards Command plays in influencing police culture and practices it is vital that any indicators of systemic racism are examined. Deep institutional racism can only be tackled when it is honestly and transparently exposed.”

In its examination of best practice police oversight, the parliamentary IBAC Committee recognised the central role of transparency and the importance of robust public reporting in its report to parliament.

“Now it the time for IBAC to put those principals into action, “ Mr Kelly said.

When he was still a Superintendent, Brett Guerin was managing the Moonee Valley police service area during the time of the discriminatory Operation Molto and held oversight of  complaints about police from the Flemington region in 2006 and possibly afterwards.

The whole process by which Guerin was allocated the Flemington complaint files and then his progression through to Assistant Commissioner and head of PSC remains a point of concern.

The exposure of his racist views about people from Somali, Indian, Pakistani and Argentinean decent cast a sickening shadow over his role at that time.

“That the head of Vicpol’s Professional Standards Command could hold such views really drives home the need for a police complaints body that is culturally, hierarchically and practically independent of police.”

“The onus is now upon Victorian Parliament to ensure that Victorian’s have effective police accountability systems and practices that all Victorian’s can trust.” Said Mr Kelly today.

In 2018 a joint parliamentary committee, after an extensive inquiry, made 69 recommendations to improve the way police corruption and misconduct is investigated and prevented in Victoria.[1]

Importantly, this committee recommended the establishment of an adequately staffed and empowered Police Corruption and Misconduct Division within IBAC.

It has also recommended that IBAC, rather than Victoria Police, investigate serious police misconduct. To assist IBAC in these important functions, the Committee recommended the conferral of selected additional investigative and oversight powers on it.

“[It] is essential for the maintenance of public confidence in Victoria’s complaints system [that] IBAC, rather than Victoria Police, generally investigate…serious police misconduct.”[2]

The joint parliamentary committee provided a powerful, thorough analysis containing a clear set of recommendations for police oversight in Victoria.  It pays careful attention to the experiences of vulnerable Victorians and international best practice.  The key recommendation articulated in the report is that serious complaints and incidents need to be investigated independently of the police. 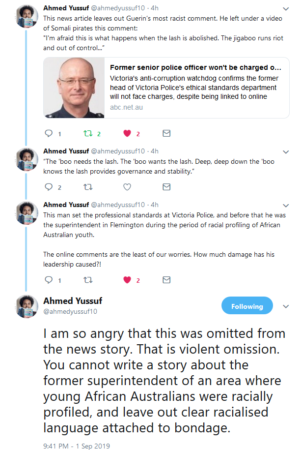 From around October 2005, the Flemington & Kensington Community Legal Centre received and documented a large number of reports of human rights abuses against African and Afghani Australians in the Flemington and surrounding regions. The centre documented up to 100 such allegations over that period.

During 2006 the centre had submitted 17 formal complaints to the then Office of Police Integrity (OPI) on behalf of young people about their treatments by police in the region. Some of these complaints were the subject of later court action and the racial discrimination claim in the Federal Court which was settled in 2013.

The report by Fairfax journalists, of  Mr Guerin allegedly using the term “towel head”, when he addressed a group of police officers and staff in the mess hall of Flemington police station in 2006, which was the subject of an internal complaint the following year.

These policing practices and the racist police culture that surrounded them may well have been reinforced under Guerin’s management at the time.  The release of Operation Turon findings should be able to shed some light on this possibility.

An ineffective police complaint system has the effect of hiding or ignoring human rights abuses against members of the Victorian community. Victorian Parliament has a particular responsibility to ensure the effective and impartial investigation of complaints against police.

[1] The ‘Inquiry into the external oversight of police corruption and misconduct in Victoria’ report can be found here: https://www.parliament.vic.gov.au/58th-parliament/ibacc/article/3802

The IBAC Committee was amalgamated in 2019 to form the Integrity and Oversight Committee, a joint investigatory committee of the Parliament of Victoria.

“The executive officer of the Flemington Kensington Community Legal Centre, Anthony Kelly, said the information needed to be available to Parliament immediately. “We still don’t know if Guerin’s racist attitudes were known to the Chief Commissioner or others in VicPol command at the time of his promotion,” Anthony Kelly said… 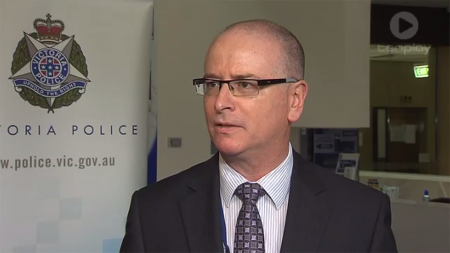 Over 100 claims to be reviewed after cop in charge of complaints quits, Manny Tsigas, SBS World News, 27 February, 2018

VIDEO: “Legal advocates will review more than 100 claims of racial profiling and other complaints against police that were dismissed while Victoria’s Assistant Commissioner Brett Guerin held senior positions in the force…

“Complaints about racist remarks made by the disgraced head of Victoria Police’s own Professional Standards Command were lodged more than a decade ago, but Brett Guerin continued to be promoted through the ranks, The Age can reveal….

An Open Letter to the Premier of Victoria: Investigation of police misconduct
Independence critical in death-in-custody investigations