A solution that’s often proposed to deal with problems of racial profiling is to increase police ­force diversity.  But does a more diverse police force mean less discrimination?

Victoria Police is devoting considerable time and attention in their efforts to recruit and retain workforces that reflect the diversity within Victoria, conducting recruiting programs in diverse community suburbs and specifically targeting people of African background as recruits.

Official Victoria Police policy calls for what it terms a “diverse workforce which represents the community”, and recruiting young men and women of African heritage is now a focus of its recruitment strategy.

The slow growth in police members from diverse backgrounds has been trumpeted by Victoria Police over recent months but they have had significant difficulties attracting diversity into their ranks for some time now. Of the 14,250 Victoria Police members, only a tiny percentage come from a non-English speaking African communities.

A significant recruiting push in 2017, involving targeted forums and info sessions and facilitating Protective Service Officers, whose ranks are far more diverse, becoming police officers has started to shift this. Over the past six years the number of African-born police officers has more than doubled from 34 to 70, (a percentage of those from South Africa however).

The basic assumption of efforts to create a more culturally and linguistically diverse police force is that if police more closely resemble people in the community, then this will reduce police-community conflict and help to ‘restore trust’. 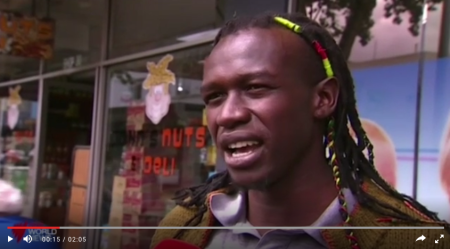 In this SBS TV interview, Samual Malual,  describes how he has been beaten up by police in a cell, called a ‘N……’ by a police sergeant.  He also believes that increasing diversity could help overcome tense relationships which at times can occur between police and various sections of the community. “The police would definitely learn from that person culture-wise,” Mr Malual says.

Former Victoria Police Deputy Commissioner Andrew Crisp told SBS news that diversifying the force brings benefits to the community and the other officers.  “It actually provides an opportunity for other police members around the mess room table to talk to [African police members] which actually helps them be more empathetic in dealing with people in the community.”

At first glance this assumption seems reasonable. In the town of Ferguson in the USA, where Michael Brown was shot by a white police officer in 2014, the community is two-thirds black, the police department is 94 percent white.    The local stop data shows that 86 percent of traffic stops there are of black drivers, as are 93 percent of the resulting arrests. Such a disparity in the racial make-up between police and policed is often seen as a big part of the problem. Likewise, he Chicago Police Department has had a hard time recruiting black officers, who are 23 percent of the force in a city that is about one-third African-American.

However it is not at all clear whether having more officers of color would actually help protect people of color from racially biased treatment by police.

Melbourne criminologist Stephane Shepherd, writes that the claims that a more “cosmopolitan service will through some means alleviate prejudicial policing and enhance relationships with the wider community” are largely unsubstantiated.

Professor Delores Jones-Brown founding director of the Center on Race, Crime and Justice at John Jay College of Criminal Justice in New York believes that based upon the academic literature “diversifying the identity of the people on the police department is not a panacea to police brutality, misconduct or poor police-community relations.”

Jones-Brown states: “There is a bit of naivete that if you have an officer of color, that officer can’t engage in racial profiling. And I think all the evidence suggests that’s not the case. We do see black civilians, particularly black men, as potentially more dangerous, potentially more criminal, than others. Even black and other minority police officers engage in that stereotype as well. One explanation is that they may be attempting to prove themselves as worthy of the police culture or demonstrate to their white counterparts that they’re not being more lenient on their own ethnic group.”

A 2004 National Research Council report found that, “there is no credible evidence that officers of different racial or ethnic backgrounds perform differently during interactions with citizens simply because of race or ethnicity.”

Phillip Atiba Goff, director of the Center for Policing Equity at John Jay College in New York has also questioned the theory that if police departments better reflected the racial makeup of the communities they served, incidents of police violence would decrease. “I think the assumption is that racism can’t exist in black people, and so if we have more black police, we’re just going to have different results ” he said.

White officers in Cincinnati were not more likely to arrest non-white suspects, under similar circumstances, but black officers were, a 2006 study found.

Brad W. Smith, from Wayne State University, set out to assess the direct impact of the diversity of departments on police-caused homicides. His study, published in the Policy Studies Journal found that, while the racial make-up of a community had a measurable impact on the prevalence of police violence there (namely, the larger the black population, the more frequent the violence), the proportion of minority police officers to white police officers in a department “had no significant influence on levels of police violence.”

Smith suggests why this may be. “The simplest explanation is that increased racial diversity in large municipal police agencies may have no relationship to police-citizen relations and thus police killings,” he writes. “Regardless of who is carrying out the police function, police will always be seen as representatives of the larger establishment. As such, tensions between police and citizens may be a function of the police role.”

In the US, Black law enforcement associations have played a role in advocating against racist practices and supporting key accountability reforms. There is no doubt that the many Black police officers in US, the UK and Australia have long battled prejudices, discrimination and their efforts have helped shift internal attitudes within their respective police departments.  But we cannot expect, nor should we leave it up to, the tiny number of African-Australian police members to ‘change attitudes’ of an entire police force.  It is simply not fair on them, nor it is realistic, to expect a small number of diverse recruits to shift institutional attitudes, policies and practices.

Women have been serving in Victoria Police for just over 100 years, and yet the Victorian Equal Opportunity and Human Rights Commission 2015 review of sex discrimination and sexual harassment found an organisation where sexist attitudes and behaviour were the norm; where women were bullied, harassed and discriminated against and extraordinary levels of predatory behaviour amoungst Victoria Police personnel.  It has taken the largest external and independent review of its kind in the world, along with persistent monitoring since to finally see some institutional change.

The reasons Victoria Police is having difficulties in readily recruiting more African-Australians may be many and various. Literature in Australia points to factors including ‘perceived racism within the service’ and frustration with the aggressive policing of minority communities.   Shepherd states that “the over-policing of Australian Aboriginal people and minority groups by the police service is well documented” and points to accounts of racism directed at minority police by their colleagues including the account of Australia’s former most senior Aboriginal police officer, Collin Dillon, who expressed that he encountered “the dreaded spectre of racism’ from the day he entered the police force in 1965 until his departure in 2001”. Sheppard reports that “minority police officers have often felt pressured to deliberately suppress their ethnic identity in order to conform to a homogenous policing culture rigidly fashioned by Caucasian precepts.”

The promotion of diversity and inclusion and a safe and supportive work culture are laudable goals for Victoria Police. Diversity is important in any organisation and Victoria Police should continue in their efforts to better reflect the Victorian community.

But we should not see it as a solution to discriminatory policing practices.

Diversity recruitment should not be seen as a replacement for the important and challenging task of implementing accountability and anti-discrimination measures, such as the monitoring and reporting on police stop data.

“Data is the best tool for addressing community concerns about racial bias in policing,” according to San Diego council member Shirley Weber. “The information collected will help get us past the debate about whether the problem exists, and instead help us move forward in determining the scope of the problem, who’s targeted and where it might be concentrated.”

Weber moved legislation to make sure every police department in California collects racial and other demographic data when officers stop people. The aim, Weber said, is to inform policy for how police interact with communities of color.

The Los Angeles police and Los Angeles County sheriff’s departments and the seven other agencies with 1,000 or more officers began collecting the data in July 2018 and will release their first annual report in April 2019.

By 2022, all police agencies in California will be responsible for doing so.

Californian Attorney General, Xavier Becerra recently stated “Racial and identity profiling are not acceptable policing practices and do not increase public trust between law enforcement and the communities they are sworn to protect.”

This is the sort of work Victoria Police must be taking seriously and devoting the requisite care, attention and resources to get it done.

Police must take action on racial profiling after Four Corners expose
New body for complaints against police in Victoria is a good move, with some caveats