The minimisation of police assault

The minimisation of police assault

Assistant Commissioner Brett Guerin, head of Victoria Police’s internal investigations unit is quoted in the recent Fairfax article (Police complaints process overhauled after a decade of criticism, 17 September 2017) that the “vast majority of complaints … relate to service delivery issues.” One of the examples he provided is “police pushed me when they didn’t need to.”

Actually, this is an allegation of assault.    To define an unlawful ‘push’ as a “service delivery issue” speaks volumes and is an example of the minimisation of assault by police that we see so often in our casework.  One of the features that distinguishes policing from other occupations is the lawful authority given to police to apply force when circumstances call for it. But the operating word, of course, is ‘lawful’.

Our former Principal Solicitor. Tamar Hopkins, tweeted the same. “Police putting handcuffs too tight or pushing people” are not service delivery issues.. they are assaults.” 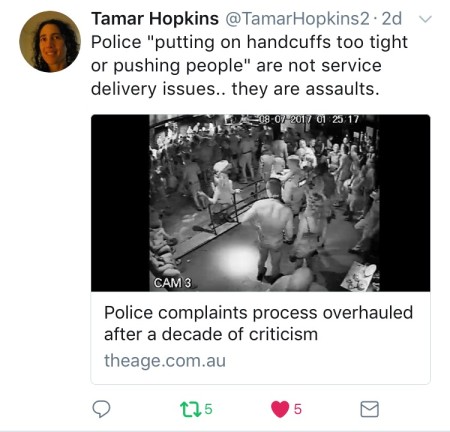 Police tend to minimise their own actions regularly.  We have highlighted the issue of complaints being minimised and downplayed by Professional Standards Command in our recent Independent Investigations Policy Briefing Paper, submitted this month to the historic parliamentary Inquiry into the External Oversight of Police Corruption and Misconduct in Victoria.

Police investigators have in the past decided that punching is ‘subduing an offender,’  that pushing a 15 year old to the ground and grabbing them around the neck after he ‘answered’ back, was entirely acceptable.  We believe that independent, non-police investigators would  come to a very different conclusion in most of our complaint files.

In our submission to the Victorian Inquiry we say that an ineffective police complaint system has the effect of hiding or ignoring human rights abuses against members of the Victorian community. All complainst catagorised as ‘customer service complaints’ shouldalso be annually audited by an independent body, to ensure allegations like assault or other human rights infringements like racial abuse, discrimination, unlawful arrests are not improperly classified and hidden. Audits would also allow for systemic issues to be identified.

Assistant Commissioner Guerin also claims that “community confidence is still high” and that “complaints are not going up, in some areas they’re going down.”

Our police complainst clinic turns away over 120 people each year who want to make a complaint against police but we don’t have the resources to help. Our experience and data tells us that the vast majority of people experiencing police assault, particulary young people and the most vulnerable,  do not make a complaint.

The hard-hitting submission by the Victorian Aboriginal Legal Service (VALS) points out that Aboriginal people believe that it is ‘futile’ to make complaints against police and that the ‘Koori community is largely disillusioned with the system and significant work is needed to develop confidence.’  Their submission highlights just how little has changed since the Koorie Complaints Project report in 2009.

As part of their submission VALS released a video of one of their clients. It is a horrifying story   The video tells the story of ‘Caroline’s experience with the police complaints system in Victoria. It should be watched by all those who think our current complainst system is effective.

Police are proud that 32 Victoria police have been charged. But what does that mean?

Both the Police Association Victoria (PAV) and Assistant Commissioner Guerin,  have referred to the number of Victoria Police facing charges this year as evidence that Victoria’s current ‘police-investigating police’ model is working.

But what does it mean that thirty-two police have been charged this year?

In their submission to the parliamentray inquiry the Police Association does not dispute that police investigating allegations of misconduct of their own are “susceptible to the vice” asserted by ourselves and other researchers in the area. But they also claim that “statistically at least, there is evidence to suggest Victoria Police have little compunction in investigating, charging and prosecuting its members either in open court or through the statutory discipline regime.”

The PAV go on to present the 27 criminal defence and 23 discipline files they are currently managing relating to charges against their members as evidence that the internal investigative system is working.

This may sound like a lot of charges and it does seem to be an increase from the numbers of police charged in previous years. But a number of factors are in play here.

The first is we have nothing to compare it to. With a workforce of over 17,000 people, 32 allegations of criminality may seem quite a low number.

VicPol have been under pressure to improve their internal complaints handing systems for some time now. Most months there is police incident that makes headlines, the latest being the Inflation nightclub shooting. Our Police Complaints Clinic, now in its second year, forensically evaluates how police investigate each complaint we submit.  We analyse for bias, length of time and outcomes and find that less than 2% are substantiated by police.  The Independent Broad Based Commission against Corruption or IBAC, has now conducted several reviews and investigations into the police complaints systems including the explosive Operation Ross earlier this year.  And now the parliamentary IBAC Committee, after pressure from the community, are conducting their own inquiry. It’s the first time parliament has seriously looked at Victoria’s police complaints system ever.   The pressure on Victoria Police and its Professional Standard Command to improve their game must be immense.

Also important is the fact that a high proportion of these 32 charges are related to Taskforce Salus, a systemic investigation that was established in direct response to an independent, external review by the Victorian Equal Opportunity and Human Rights Commission (VEOHRC) into the prevalence of sexual harassment in the force.

Before the VEOHRC report was released in December 2015, AC Guerin told 3AW’s Neil Mitchell, that it was “coming down like a train at us.”  Victoria Police had to act. And to their credit they did. Taskforce Salus has uncovered and prosecuted some horrific incidents of sexually predatory behaviour including rape and has resulted in many charges. This is certainly a good thing. But the notable fact is that Police acted due to a comprehensive external, and independent investigation.  The VOEHRC review received an unprecedented number of reports from serving Victoria Police members, several of whom noted that it was the independence of the review that gave them the confidence to participate, and almost 5000 serving members did.

The VEOHRC review heard of a number of cases where reporting inappropriate workplace behaviour or sexual harassment – even physical and sexual assault – was regarded as an act of disloyalty to ‘the team’. Individuals had been excluded, ostracised, shamed and physically and emotionally abused for making a report or not ‘fitting in’.  A similar dynamic occurs when police members try and report other colleagues for misconduct.

This is something we have come across time and again. This defensive internal culture of protection and collusion is one of the largest challenges faced by internal investigative models.  The VEOHRC review demonstrated that even serving police members will have more trust in an external body.

In our Policy Briefing Paper we call upon the Victorian Government to establish a body separate from police to independently investigate complaints made against police. It is a role that could be conducted by IBAC with some significant legislative and cultural changes, but which would need to include a dedicated specialist, police focused investigative unit.  This body would assess whether or not as a result of evidence obtained through the course of an investigation, criminal charges may be appropriate and if so, refer the matter promptly to the Office of Public Prosecutions for assessment.

Forty three submissions have been received by the Victorian parliamentary inquiry so far.    Of those publically available, 88% support calls for an independent body to investigate police misconduct in Victoria.

“Jack* was 15, standing in front of a Melbourne group home, his wrists in handcuffs. He had two police for company. Again. On this occasion they were called because he was lashing out at staff in the home…”

Sandra’s Story: complaining about police in a small country town
MEDIA BACKGROUNDER: Much more than an ‘anti-crime’ protest