Legal practitioners have responded to an article by General Counsel of of the Independent Broad-Based Anti-Corruption Commission(IBAC), that was published in last month’s Victorian Law Institute’s Journal.

IBAC has the power to investigate police misconduct complaints but refers roughly 90% to Victoria Police for internal investigation.i    Victoria police investigating their own officers breaches international human rights standards and has been criticised by the UN Human Rights Committee.ii

In last month’s Law Institute Journal, the General Counsel of IBAC, Dr John Lynch, responded to the LIV’s call for a new body to be established to investigate police misconduct complaints.

Dr Lynch said:
“We do independently assess each [police] complaint, we do review investigations that police conduct but a lot of complaints involve performance issues and low level conduct [rudeness, poor customer service]…”

We take this opportunity to respond to Dr Lynch’s comments, which does not accord with practitioners’ experience.

The current system undermines public confidence in police accountability. We reiterate our call for a new, complainant-focused, and transparent body for the investigation of police misconduct complaints.

i ‘Policing the police’ (2014) 11 Law Institute Journal 14.
ii See Covenant Against Torture and Other Cruel, Inhuman or Degrading Treatment or Punishment, International Covenant on Civil and Political Rights and Human Rights Committee, Views: Communication No 1885/2009, 110th sess, UN Doc CCPR/C/110/D/1885/2009 (27 March 2014) (Horvath v Australia)
pcl_devel_16300ra_335.docx
iii IBAC Special Report on Police Oversight (August 2015), p 5.
iv IBAC 2014/2015 Annual Report, p 17.
v IBAC Special Report on Police Oversight (August 2015), p 5.
vi Section 194 Independent Broad-Based Anti-Corruption Commission 2011 (Vic) exempts documents from being accessed under the Freedom of Information Act 1892 where they relate to a complaint received by IBAC. Victoria Police rely upon this provision and refuse to provide documents through FOI where the initial complaint was received by IBAC, even if the subsequent investigation was by Victoria Police. No such exemption applies where the initial complaint was made directly to Victoria Police. 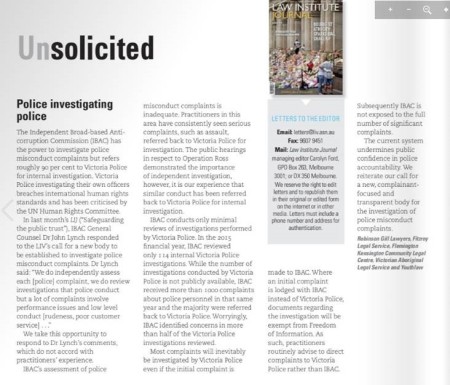