If you attended the 2019 IMARC protest and would like to register your interest, please send a brief email with your contact details to:  classactions@phifinneymcdonald.com

Phi Finney McDonald and Flemington Kensington Community Legal Centre’s Police Accountability Project are investigating a potential class action against the Victorian State Government for Victoria Police’s use of pepper spray against protesters at the International Mining and Resources Conference (IMARC) in Melbourne between 29 and 31 October 2019.

Protestors demonstrated outside IMARC to oppose the violation of human rights, the dispossession of indigenous people, the exploitation of workers and to highlight climate justice.

The demonstration drew a significant number of protestors and a large police presence. The conduct of Victoria Police has drawn criticism, including in relation to the use of pepper spray against groups of people engaged in peaceful protest. Pepper spray, known as Oleoresin Capsicum foam (OC foam), contains an extremely high concentration of capsaicin, a chemical found in chilli peppers, which can cause significant injuries and potentially permanent disabilities. The use of OC foam may breach the law when used as a coercive tool, or where there is no immediate or proportionate threat to police officers or the public.

Phi Finney McDonald and Flemington Kensington Community Legal Centre are investigating a class action in relation to the force used against the 2019 IMARC protestors.

A “class action” is a case that it is brought by a person or persons on behalf of a group of other people, called “group members”. Class actions can be an efficient way of allowing people to take related claims against the one defendant. A class action may be viable where an individual claim is not because of resources, cost or otherwise. Group members are not typically liable for the costs of the defendant if a class action is unsuccessful. Accordingly, class actions can level the playing field against well-resourced defendants.

If you attended the 2019 IMARC protest and would like to register your interest, please contact us at classactions@phifinneymcdonald.com.

Registration is optional and without obligation. You will not have to pay to register and all information you provide will be kept strictly confidential by Phi Finney McDonald and Flemington Kensington Community Legal Centre. 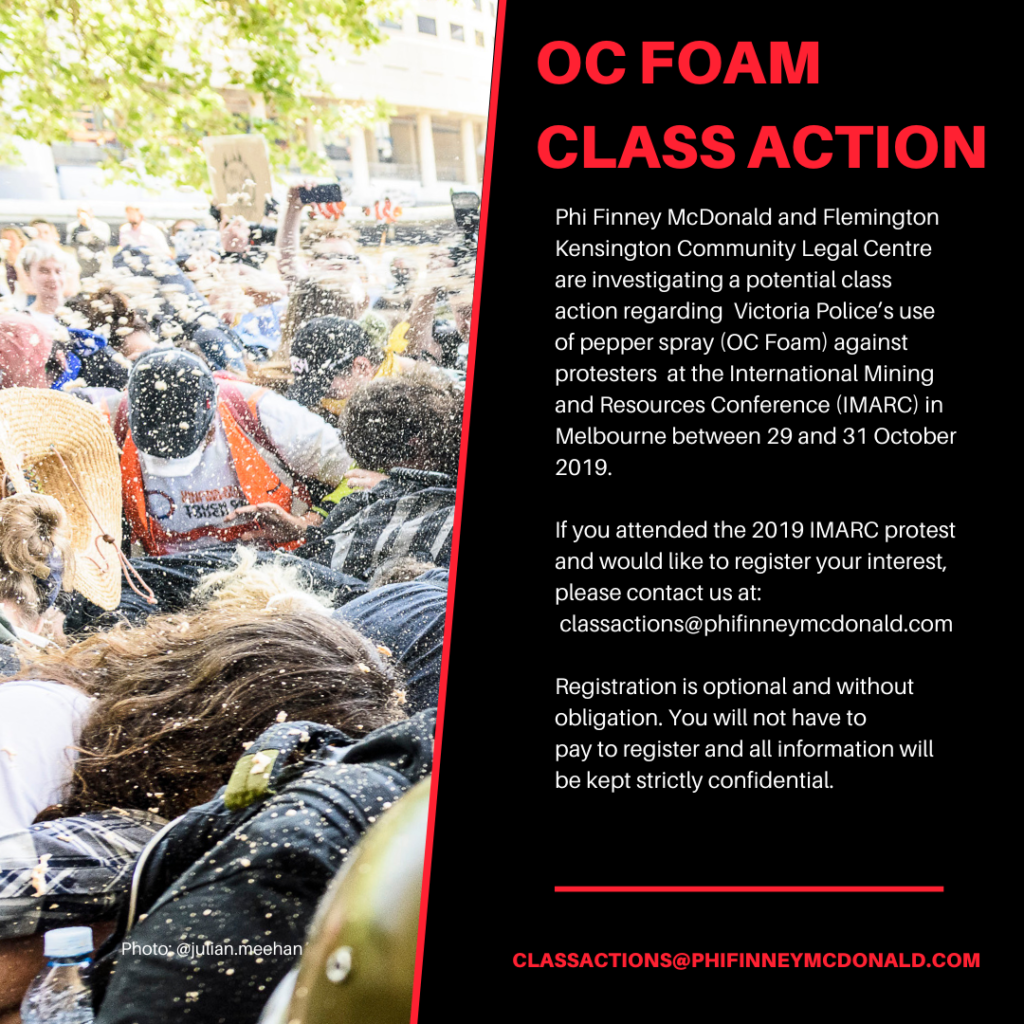