In a very welcome move, the Independent Broad-based Anti-corruption Commission (IBAC) announced today that it has charged “a Victoria Police Leading Senior Constable with assault offences in relation to an incident in Hastings in March 1996.”

“It’s taken twenty years for the treatment of Corinna Horvath and the actions of police to be adjudicated independently and scrutinised by the criminal courts.” Solicitor Tamar Hopkins, who assisted Ms Horvath take her case to the United Nations stated said today.   “It is a relief that there is finally a criminal justice response.”

The Flemington Kensington Community Legal Centre, along with a wide range of community and human rights organisations have been calling upon the Victorian Government to ensure the independent investigation of police and the independent and transparent discipline of officers through mechanisms that protect and involve the victims of abuse.

“It is not fair to anyone that it has taken 20 years for these charges to appear” stated Mr Anthony Kelly, Executive Officer of the legal centre. “Had there been an independent and properly empowered body to investigate Ms Horvath’s original complaint against police, this matter might have been resolved within a year or two rather than decades.”

Corinna Horvath will not be making any media comment until after the case.

In order to increase access to justice for victims of police misconduct in Australia, the Flemington Kensington Community Legal Centre acted for Ms Horvath in a communication to the United Nations Human Rights Committee.

The Horvath v Australia decision, which was handed down in 2014, obligates the Australian Government to ensure that victims of police human rights abuses have a right to appropriate remedy and the ability to have complaints relating to police abuse heard by an independent body.

IBAC initiated an own-motion review of the handling of Ms Corinna Horvath’s complaints and associated Victoria Police disciplinary action after the UN Decision.

Background to the extraordinary Horvath case can be found at https://www.policeaccountability.org.au/corinna-horvath/ 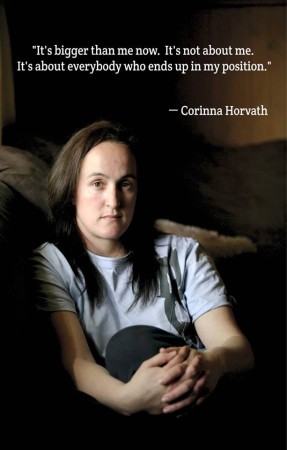 A Timeline of the Corinna Horvath Case

March 1996:   Corinna Horvath brutally assaulted by a group of police officers during a raid on her home.

June 1997:  Horvath and three other plaintiffs file proceedings for damages in the Victorian County Court.

February 2001: Judge Williams finds that all four officers names were liable for trespass, wrongful arrest, and false imprisonment and order that substantial damages be paid.

April 2001: The State of Victoria files and appeal against Judge Williams decision

November 2002: Court of Appeal overturns the decision of Judge William in regard to the liability of the State of Victoria.

June 2004: Leave to appeal the decision of the Court of Appeal to the High Court of Australia was refused. Thereby exhausting all domestic remedies for Ms Horvath.

August 2008: A 45-page communication, prepared by the Flemington and Kensington Community Legal Centre with counsel Dyson Hore-Lacy SC and Michael Stanton, is provided to the UN Human Rights Committee for violations of the International Covenant on Civil and Political Rights (ICCPR).

March 2014: the UN Human Rights Committee hands down its scathing decision, finding that Ms Horvath’s right to an effective remedy was violated, in relation to the cruel, inhuman or degrading treatment, arbitrary arrest and detention to which she was subjected, and the interference with her home and privacy. The Committee recommended legislative reform and adequate compensation for Ms Horvath.

July 2014: Thirteen civil and legal organisations write a joint letter urging a substantive response from the State of Victoria to the findings of the United Nations Human Rights Committee (‘Committee’), and the timely implementation of the Committee’s direction to Australia and, by necessity, the State of Victoria, to remedy its breaches of the International Covenant on Civil and Political Rights (‘ICCPR’),

September 2014: Corinna Horvath receives an ex-gratia compensation payment from the State of Victoria with an accompanying written apology from Chief Commissioner of Victoria Police Ken Lay.