Why police should not be in our schools 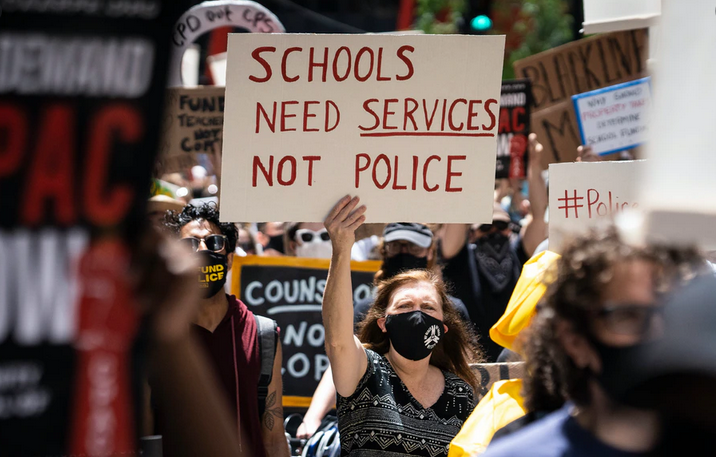 Victoria Police are planning to bring back some sort of ‘Police in Schools’ program.  We don’t know the details as yet but it will be announced later this year, but the ABC has reported that it will not be as comprehensive as the police in schools program that was abandoned in 2005.

But any police in school setting can have harmful consequences that are unacknowledged by its proponents.  There are so many reason why this is a very bad idea.

The Victorian Liberal Party adopted a policy of having full-time police officers embedded in 10 Victorian high schools as part of their ‘tough-on-crime’ agenda in the lead up to the 2018 election.  They have celebrated this latest attempt by VicPol to restart the program.

The ABC has reported that this renewed push for a Police in Schools program “comes as new Victoria Police Commissioner Shane Patton seeks to bolster the force’s relationship with the community, particularly after a sometimes fractious 2020 that involved lockdowns and record fines for people breaching the state government’s coronavirus restrictions.”

They don’t do what they claim to achieve.

Beyond being a public relations exercise, police in schools programs are a terribly flawed and outmoded concept.  There is little to no evidence to suggest these programs ‘reduce crime’ or ‘address youth offending’ as is often claimed. Very few methodologically robust studies evaluating the effectiveness of police in schools programmes— i.e. studies that compare schools where police are present to schools where police are not present — exist.  No robust evaluations have been conducted of school-based police programs in Australia.

They are more often proposed as a way of ‘building respect in young people’ and ‘creating positive relationships between police and young people’.  Former Chief Commissioner Kel Glare who has been lobbying for a return of the program since they were axed by Victoria Police back in 2005, has claimed that they “inculcate young people with the moral and ethical standards that lead them to becoming good and law abiding citizens.”

Teachers do that. No matter how well-meaning and educated about youth development, police are not teachers nor are they child psychologists.  There is little evidence that having police present at schools will enhance young people’s trust, respect or relationships with police or trust in authorities – especially when compared to programs run by actual teachers or children’s development experts.

These funds would be better spent on mental health support.

It also comes at a time when school based supports and kids mental health services and programs are overloaded to breaking point.

Last year the Australian Psychological Society (APS) called on the Victorian Government to support and protect the mental health of young people bu putting a school psychologist in every school. Mental health experts and principals are pushing for a new national benchmark of one school-based psychologist for every 500 students across Australia to address the alarming rates of mental illness among children.

Lawyer Anoushka Jeronimus, director of youth programs at WESTJustice, says the idea is terrible and shortsighted. “It’s confusing — they [police] can be friendly, but they won’t be your friend if you commit a crime, they will charge you.”

“If the aim is to develop trust between police and young people, this would be better achieved through police being better trained to interact with young people like de-escalating conflict, unconscious bias and understanding the ages and stages and impact of trauma.”

Police officers, despite better training around youth development these days, have a tendency to revert to the old ‘scare-them straight’ approaches with young people which, as every teacher knows, does not work at all.

Law enforcement is central to the role of policing, and evidence suggests that police officers often revert back to these roles. Moreover, police officers are ill-prepared and inadequately trained for pastoral roles. If schools want youth-workers, counsellors, pastoral staff, or additional teachers, then the government should employ professionals in those roles – not police officers.

For many young people from over-policed communities, police officers do not invoke a sense of safety. Therefore, the ability of police officers is always already limited by a wider culture of institutionally racist policing.  If Victoria Police wants to build positive relationships with young people then eliminating discriminatory and intrusive stop and search practices would be a far better place to start.

No matter how many ‘friendly relationships’ young people have with police, it is actual police behaviour and practices which young people distrust.   Some clients at our legal service in Flemington accompanied serving police on the famous Kokoda trail in Papua New Guinea, a multi-week program run by Victoria Police to ‘heal the relationship’ with local young people.  Those young people were still racially profiled, harassed, stopped, searched and assaulted by other police when they returned.   Young people from over-policed areas often know that some police can be friendly and respectful and others dangerous.  But knowing ‘friendly’ police does not lesson the risks of harmful criminalisation for young people  – in fact it can just add to that risk.

Having police in schools increases the risk of criminalisation.

A study published in the Journal of Policy Analysis and Management (2016) reported that even the simple act of becoming “known to police” may increase the severity of the criminal justice system response to future behaviour.

When police are embedded in school systems and in classrooms, common student behavioural issues are more likely to prompt criminal responses. Young people who are vulnerable, at risk or from a marginalised backgrounds, or, when racial bias comes into play, are of a particular ethnicity, are more likely to be treated as criminals rather than get the support they need.

A report by the Justice Policy Institute (2011) argued the presence of police in schools has led to an increase in arrests and referrals to the justice system, particularly for minor offences
such as disorderly conduct. Many others have similarly argued that the use of SROs brings children into the juvenile justice system for behaviour that might be better handled by school administrators (Theriot 2009, Kupchik 2010, Na and Gottfredson 2013).

It risks generating what is known as a ‘schools-to-prison pipeline’ that has been well documented in the United States.

Education Week Research Center reports that schools with cops are more likely to refer children to law enforcement, including for non-serious violent behaviours.  In a study of 43 states and the District of Columbia, Black students were more likely to be arrested than other students while at school.

“We’re worried such a program would target schools identified as having kids labeled as ‘troubled’ and ‘at-risk’, and lead to unnecessary interactions with police,” Ms Jeronimus told ABC this month.

Numerous studies in the US have highlighted the dangers of ‘police in schools’ programs that exacerbate the already intensive and almost daily police contact that young people from marginalized or vulnerable backgrounds face.

In one US example from Virginia, a 4-year-old with ADHD threw a temper tantrum in his prekindergarten classroom —allegedly throwing blocks and hitting and kicking his educators—the school’s principal, according to reports, summoned a deputy assigned to the school, who then handcuffed the child and transported in a squad car to the sheriff’s office. Other studies show clearly that school discipline is meted out along racial lines with 70% of school students who are arrested at schools being Black or Latino and Black students being 3.5 times more likely to be suspended.

Young people in many areas of Melbourne are stopped by police on an almost daily basis.  Then they play soccer with police after school. Then they get stopped again by a patrol car on the way back home from their basketball club which might also be run by police. Police contact is a routine, and often frustrating experience for young people who don’t want to be treated like they are criminals.

The process of criminalization, is where young people are relentlessly drawn into more and more contact with police and criminal justice responses like being trapped in quicksand. It is poorly understood in Australia. Proponents don’t really understand the impact of programs like this.

This initiative from Victoria Police comes at a time when a huge national alliance in Australia is calling on all levels of government to raise the age of criminal responsibility from 10 to 14 years of age as a matter of urgency.

Raising the age of criminal responsibility has been identified as an area for urgent reform for the physical and psychological health of nearly 600 children under 14 who are locked up in prisons each year in Australia. This is a view shared by Aboriginal and Torres Strait Islander organisations, medical and legal experts, service providers, Australian and international human rights organisations, the global community and multiple foreign governments through United Nations (UN) processes, and UN human rights bodies.

See the Raise the Age campaign for more information.

Having police back in Victorian Schools is a misguided and ultimately harmful idea.

Police in schools program to return to Victoria, but what will it achieve? Richelle Hunt-and Jonathon Kendall, The Conversation Hour, ABC Radio Melbourne 6 May, 2021

Until 2005 police officers were being placed in schools across Victoria in a bid to build community relationships. Three decades later, Victoria Police want to bring the program back. Will the new program benefit students and build a friendly relationship with the police force, or will it make students less trusting of police officers?

Victoria Police is pushing to bolster its presence in schools with a series of new programs more than a decade after the last strategy was officially scrapped, but experts are split over whether it will build community relations or is a worrying intervention by the police force.

No Police in Schools UK

No Police in Schools is a community campaign led by Kids of Colour and the Northern Police Monitoring Project. We are united by our shared concern over the increasing presence of police in schools in Greater Manchester and beyond. We are parents, teachers, young people, youth workers, community members, academics, and activists, and we believe that there should be No Police in Schools.

Cops and No Counselors” How the Lack of School Mental Health Staff is Harming Students.

A report by the ACLU which  reviews state-level student-to-school-based mental health personnel ratios as well as data concerning law enforcement in schools. The report also reviews school arrests and referrals to law enforcement data, with particular attention to disparities by race and disability status. A key finding of the report is that schools are under-resourced and students are overcriminalized. 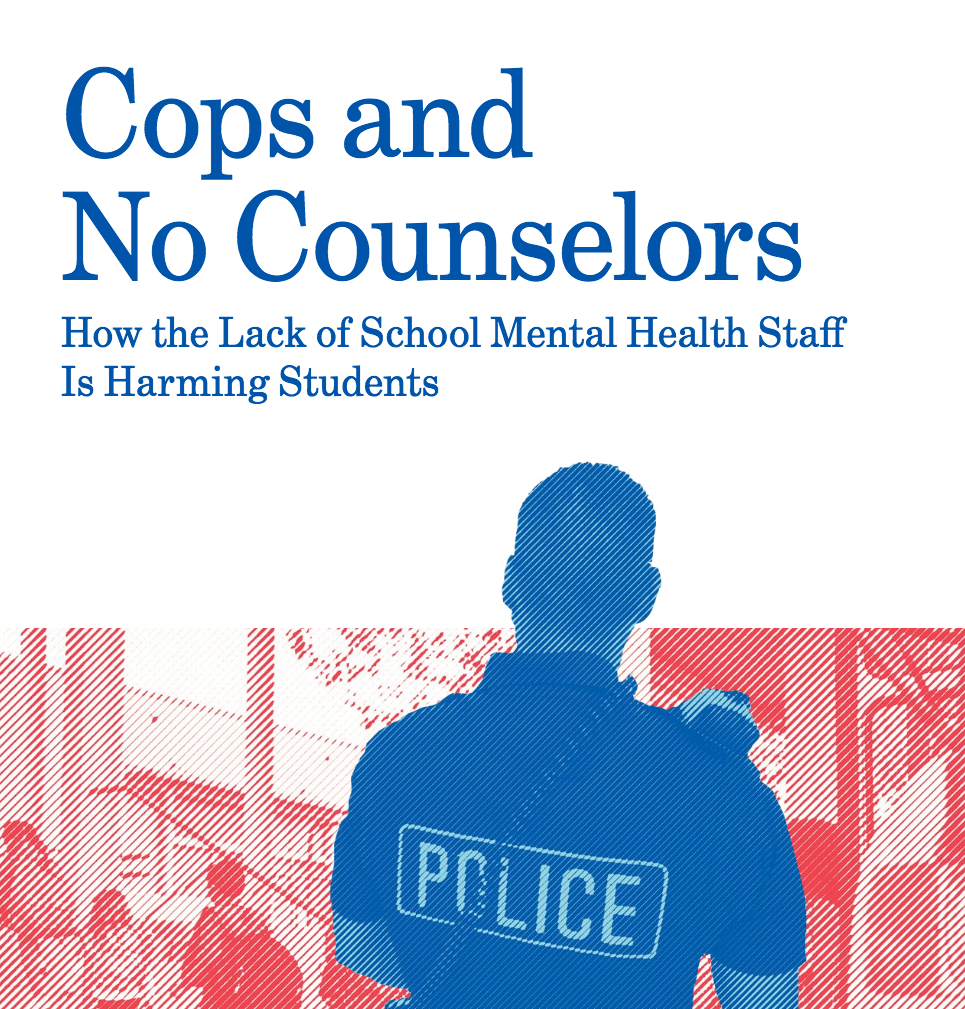 Fact Sheet: How bad is the Schools to Prison Pipeline?

Promoting Alternatives to Police in Schools: Addressing the School to Prison Pipeline