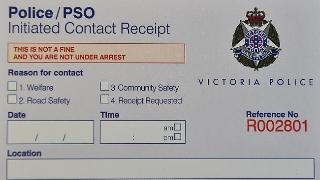 Victoria Police is about to roll out Australia’s first stop-and-search receipting pilot program, spurred by a Federal Court case in 2013 concerning racial profiling…

A TRIAL requiring Greater Dandenong police to produce a receipt for every informal interaction with the public has been slammed by The Police Association of Victoria.

Victoria Police’s trial “receipting” program to stamp out racism will fail to collect data that could reveal racial profiling patterns, according to community lawyers.

THE long-awaited police receipt trial will start in Moonee Valley this month, when officers will be required to document their approaches.

Victoria Police have launched the first pilots for stop and search receipting.

The Receipting Proof of Concept (RPOC) is one of the commitments made by Victoria Police as part of the ‘Equality is not the same…‘ report and was originally proposed for Victoria Police by the Flemington & Kensington Community Legal Centre and Arnold Bloch Leibler, in 2010.  Receipting can increase the transparency of policing by ensuring people who are stopped or searched by police are given a receipt setting out the legal reasons they were stopped or searched.

The aim of this  is to prevent  arbitrary and racially discriminatory stops and searches by police, and allow tracking and documenting any racial disparities in stop and search patterns.

As part of the first stage of the RPOC to begin on 30 March, police and PSOs operating in Moonee Valley and Greater Dandenong LGAs will issue Police Initiated Contact Receipts when they initiate contact. This includes where a person is asked to provide their details and no law enforcement outcome is recorded.

A second stage of receipting will be rolled out in the Boroondara LGA and Mildura response zone from 29 June 2015.

Details and multilingual information is available on the Victoria Police website.

Our Problems with this Receipting Pilot

The current pilots will not collect the police officers assessment of the person’s race or ethnicity.  Without collection of the officer perceived race of the person stopped, there can be no monitoring of the existence or not of racial profiling.

Collection of data on the race of people stopped is the critical tool in understanding and preventing racial profiling.  It occurs in the UK, Europe, Canada and the US.  Without data monitoring racial profiling will continue unchecked.

Social psychologist Dr. Philip Atiba Goff,  cofounder and President of the Center for Policing Equity in the United States, says, “You can’t fix a problem if you can’t first measure it.”

Despite Victoria Police publicly stating its ‘zero tolerance for racial profiling’, in 2015 it continues to be the case that our African clients experience vastly disproportionate traffic and street stops by police.

Victoria Police’s current plan for a receipting pilots fails to deliver on the promises made to the applicants in the Haile-Michael case and to the Victorian public at large.

As a consequence of the Haile-Michael settlement, Victoria Police authorised a review into field contact practices.  The CIRCA review in 2013 made it clear that that:

‘The main focus of monitoring should be to assess if specific community groups are over-represented in field contact activity’[1].

‘It is expected that police members make objective, evidence based decision making in the field’[2]

We will revise our field contact data collection, monitoring, analysis and reporting[3]. We will examine receipting options to scope, develop and trial a receipting pilot.[4]

“In order to answer community concerns around whether particular groups are being subjected to over-policing, we need to have an understanding of whether there are systemic trends. Without the collection and monitoring of data in this area, these questions will not be answered.”

Victoria police have also cited differing community opinions about whether ethnicity data should be collected by police. However, much of this indicates community concern and mistrust of Victoria Police in how the data would be used and published and reflects the tendency for ethnicity crime data to be misinterpreted or distorted by police, media or commentators.

With this trial – police, along with such bodies as the new  Crime Statistics Agency and VEOHRC, had an opportunity to provide the public with accurate, independently analysed and verified data – not on crime rates – but on the extent of police contact experienced by each community within the four trial areas and make a significant step in restoring community trust and confidence.

This level of transparency and accountability we see is essential to fair and impartial policing in Victoria. We remain committed to seeing ongoing statewide stop-data monitoring being implemented on a state-wide level.

The four tick-box ‘reasons’ for the contact listed on the business- card style receipt are far to generic to allow a person to understand the true basis for why they were stopped.

The four reasons listed in this trial are: Welfare’, ‘Road Safety’, ‘Community Safety’ or ‘Receipt Requested’.  These tick-box options do not point to any specific law or legislative power under which police members should be acting upon.  For the person stopped, these reasons fail to explain why they, and not the person next to them, were stopped.

By themselves, these four tick-box ‘reasons’ still permit police members to issue receipts in arbitrary and discriminatory circumstances.

To determine whether a police member was acting upon a legislatively defined power to stop someone, a ‘free-text’ field needs to be included which allows us to examine whether the police member’s action in choosing to stop a member of the public were consistent with a lawful power or not.

These two issues above point to a poorly designed trial that will fail to provide the valuable data required to determine if disproportionate, discriminatory or arbitrary stop and search is occurring in Victoria or its extent and dynamics.

Without proper data collection and monitoring the onus remains on individuals who allege discrimination to go through the difficult and arduous process of making an individual formal complaint, with minimal chance of a successful outcome.  This has been the status quo for too long and it is time for Victoria Police to take responsibility for monitoring its own service delivery policies and practices which impact upon so many Victorians.

Whilst there are positives in this receipt trial going ahead, such as the focus on the police – public point of contact and the associated human rights training provided to police members as part of the trial, it represents a lost opportunity to answer and respond to long-running and very basic community concerns.

Stop and search receipting and data monitoring by Victoria Police is the most critical racial profiling prevention measure sought by the applicants in the Haile-Michael v Konstantinidis Federal Court racial profiling litigation.

Stop and search receipting and data monitoring has three essential outcomes that work together to reduce racial profiling by police:

In June 2013, the Equality and Human Rights Commission (EHRC) in the United Kingdom announced an 18-month programme to reduce the disproportionate targeting of stop and search on black and Asian people had led to fairer and more efficient use of the powers. Police use of stop and search had been cut by up to 50% in five areas, including London and the West Midlands, without slowing the fall in the crime rate, according to the report.

The issuing of a receipt has four benefits.

Receipting is an important step that Victoria Police can take to address discriminatory policing practices and perceptions of racial profiling.

“It’s great that Victoria Police are taking the initiative, and is seeing through their promises to do something about racialised policing in Victoria. It’s disappointing that ethnicity is not going to be recorded which is going to be a major drawback in terms of data collection.”