The UN Human Rights Committee has called upon Australia to “ensure that all allegations of excessive use of force by police, including deaths in custody, are investigated in a fully independent and impartial manner.”

week, Australia’s compliance with the International Covenant on Civil and Political Rights (ICCPR) was reviewed by the United Nations Human Rights Committee (HRC).

Australia had “very little to be proud of,” according to Vice Chair of the HRC, Professor Yuval Shany.

Australian NGO, Remedy Australia, reports Australia has met its obligations to remedy human rights breaches in only 12% of individual complaints decided against Australia by the HRC.   Remedy’s Annabelle Pendlebury, reported from Geneva that Australia has received the lowest possible grade (an ‘E’) for compliance with remedies.”

Examining this appalling record, Vice Chair of the HRC, Professor Shany, was scathing of Australia’s “chronic non-implementation of the [ICCPR]“.

Shany was explicit in stating that the HRC’s Views “are not an invitation to respond” .. They are an articulation of a specific duty to take action on Australia’s obligation under the [ICCPR].”  … He went on to say that:

“This is a record that is completely off the charts – we have never seen something like this, even with countries much weaker… than Australia.”

“While we can accept in some cases delay, because changes take time especially in implementing domestic legislation, it is unacceptable for a State to almost routinely fail to implement the Views of the Committee ….”

The 2014 HRC decision in Horvath v Australia, is a clear example of Australia failing to fully implement UNHRC recommendations.

The complaint to the HRC, submitted by Police Accountability Project on behalf of Australian woman, Corinna Horvath, concerned extraordinary police brutality committed in 1996 which Ms Horvath spent years seeking justice for, despite a court of law finding police had acted unlawfully.

In Horvath, the HRC found that Australia (and by necessity Victoria), was required to ensure that police perpetrators of human rights violations are disciplined through an independent, effective and impartial complaints body.  It also stated that when the State is found to have committed human rights violations, the state is obligated to implement non-repetition measures, to prevent similar violations from occurring in the future.[1]

Despite a welcome apology and receiving compensation after the decision, appallingly, 3 years on, Victoria has still not changed the law to give effect to the HRC’s Views.  This is where we stand:

Vice-chair of the HRC, Dr Anja Ms Siebert-Fohr speaking to Australia’s non-compliance with the Horvath decision, reflected on the “massive police brutality” involved in the case, in which “Australia denied responsibility under the Covenant”.  She queried: “What are the mechanisms in place to ensure victims have effective access to these remedies?

The ICCPR prescribes that “Each State Party to the Covenant undertakes to ensure that any person whose rights or freedoms as herein recognized are violated shall have an effective remedy notwithstanding that the violation has been committed by persons acting in an official capacity” (Article 2 (3)(a)).

It is time that Victoria legislates to ensure there is proper accountability mechanisms in place when human rights breaches are committed by police officers.   The current Victorian Parliamentary Inquiry examining how police complaints about misconduct and corruption are handled in this State is a critical opportunity to recommend legislative change that prescribes independent investigations of police in line with other jurisdictions and United Nations guidelines.  Victoria must do better. 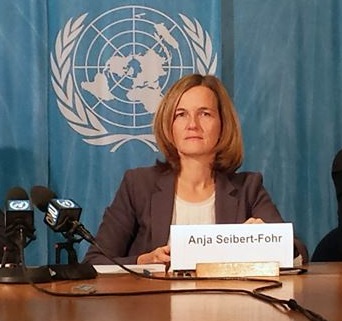 Picture: Dr Anja Ms Siebert-Fohr, Director of the Institute for International and European Law and Vice-Chair of the United Nations Human Rights Committee.

Follow-up Report on violations by Australia of ICCPR in individual communications (1994-2017) (Remedy Australia, 2017)

What is the ‘Horvath Test’?