The use and abuse of pepper spray

The spraying of horse trainer Saab Hasan on Melbourne Cup Day 2017 highlights the growing misuse of OC Foam by Victoria Police, according to a specialist legal centre based in Flemington which is currently researching the use of the substance.

Accredited horse trainer Saab Hasan was pepper-sprayed while trying to get into Flemington Racecourse on Melbourne Cup day.

Hasan arrived at Flemington around 6:45pm with Red Gucci in the horse float when he was refused access to his stables by a traffic officer.  Hasan states that he was trying to negotiate entry and was concerned for the welfare of the horse, when the police member pepper sprayed him in the face.

“I said to the officer, ‘if you’re going to refuse the car and the float entry, I’ve got no choice other than to unload the horse for its safety… so I got out of the car and he pepper-sprayed me,” Mr Hasan told 3AW on Wednesday.

Hasan states that he was not aggressive toward the police member at all.  “I didnt have anything in my hands. I didnt abuse him. I didnt threaten him.”  He told SEN Breakfast radio.

Police, media and members of the public are reminded that the police use of force that falls outside police guidelines and regulations is serious and could be determined to constitute unlawful assault.

Police rules stipulate that OC foam should only be deployed in circumstances where police “believe on reasonable grounds it is necessary and proportionate in situations: – of violence or serious physical confrontation. (our emphasis)” (Victoria Police Manual 2017).

According to Hasan’s account of the incident police did not appear to be facing a ‘violent or serious physical confrontation’ that would warrant such use of force under common law requirements or s462A Crimes Act.

The Police Accountability Project is currently tracking the misuse to OC foam by Victoria police and says that it is being used almost routinely as a way to force people to comply with directions rather than according to police’s own guidelines.

Hasan told reporters, “The sad part about it, I didn’t use any force towards the officer, I wouldn’t do that. Here he was using unnecessary force on myself and treating me like a criminal when I’m clearly an industry participant trying to go about my job.”

Hasan’s full account of the incident can be heard here. (SEN Breakfast podcast)

Other reports of the incident include: 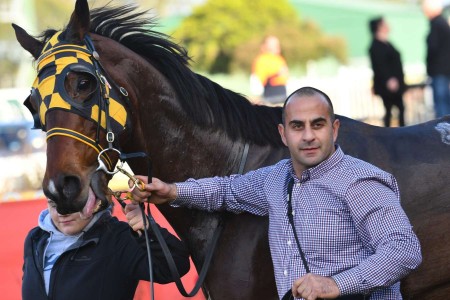 – where violent or serious physical confrontation is imminent 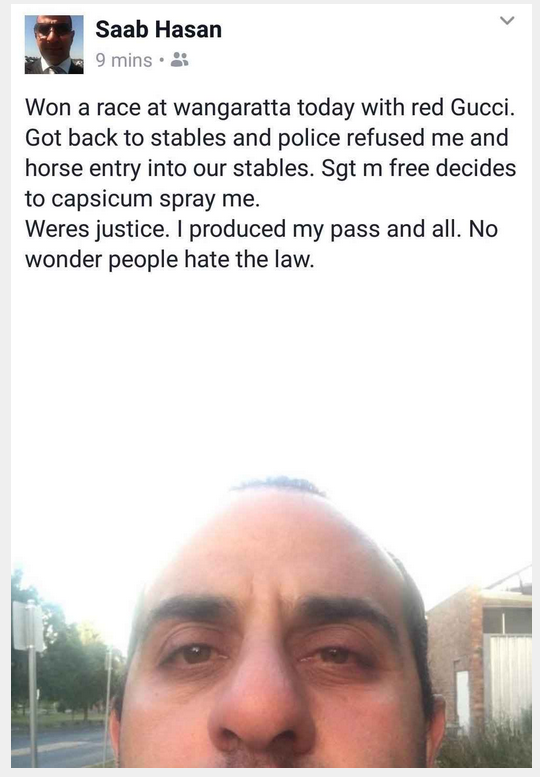 What is OC  Spray and Foam?

Olerisin Capsicum (OC) spray was introduced to Victoria Police in 1995  for use only by members of the Special Operations Group. The spray was introduced in Victoria as an alternative to lethal force following a ten year period from 1984-1994 in which there were 30 fatal shootings of suspects by police.  By 1998 the deployment of OC spray was permitted by all operational police officers who had completed a 2 day training. Since that time, its subsequent assignment to Protective Services Officers (PSO) has raised further community concern and resulted in numerous incidents of misuse.

New Report due out soon

The Police Accountability Project commenced research into OC Spray against the backdrop of increasing complaints against police and public transport officers for excessive force and inadequate police accountability processes. The report will explore the nature of and introduction of OC Spray and Foam in Victoria and assesses documented discrepencies between Police policy and conduct.

Oleoresin Capsicum (OC) spray, more commonly known as pepper spray is a product used by state authorities in Victoria as a ‘non-lethal use of force’ alternative. It is manufactured from hot cayenne peppers from the capsicum family and has the strong potential to decapascitate the individuals it is used against.
The active ingredient that creates the burning sensation in OC spray is Capsaicin. Capsaicin is a chemical derived from plants of the capsicum and chilli family. It is extracted by grinding the plant matter into a powder and the use of a solvent such as ethanol. When the solvent evaporates, the waxy resin ‘oleoresin capsicum’ remains.An emulsifier is used to suspend the substance in water and is then pressurised to make it aerosol.

The view taken by law enforcement in Victoria after initial trials was that it was a viable less-than lethal tactical option for violent confrontations:

‘Oleoresin Capsicum spray is a proven, very effective and suitable less-than lethal tactical option for Victoria Police to safely conclude violent/potentially violent confrontations and reduce the risk of injury to the public and offender in accordance with force philosophy.’

Multiple incidents, such as that experienced by Saab Hasan on Melbourne Cup Day 2017,  point to its increasing misuse and potentially unlawful application by police as a method to enforce compliance with police directions.