Submissions to the IBAC Committee Inquiry 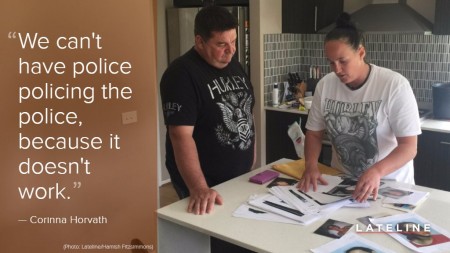 The Victorian Parliament’s IBAC Committee has announced an Inquiry into the external oversight of police corruption and misconduct in Victoria.

This is your chance to let Parliament know what you think is needed for a fair, impartial and human rights compliant investigative model in Victoria.

Submissions are only open until 3 August.

If you have experienced the current internal complaints/police investigation system or are concerned about how police complaints are currently investigated then please send a submission by using the resources and links below.

Make a submission on investigation of police complaints now

What you can put in your submission

We consider the following issues are most critical:

1. Your stories
Sending in case studies – or your individual experience of the police complaint system will be a critical way to demonstrate what needs to change.

2. Independent investigation not oversight: Oversight is not enough. It is a conflict of interest to have police lead and resolve investigations into allegations of police misconduct and deaths caused by police, including allegations of criminal conduct and/or human rights breaches that involve torture, degradation, assault, racial abuse and excessive force by police. This has long undermined public confidence in police investigations. It inhibits disclosure by police of unlawful and unprofessional conduct by colleagues; and it deters members of the public from making complaints. It  weakens accountability and trust and confidence in police, accountability, and the administration of justice.

An expert, independent body must lead and carry out, the actual investigation.

1. Independent (institutionally, hierarchically and practically);
2. Prompt;
3. Effective (capable of determining whether police conduct is unlawful and leading to disciplinary/criminal outcomes);
4. Transparent (open to public scrutiny) and
5. Victim centred (involve the victim in a way that safeguards their legitimate interests).

You can read more about these human rights benchmarks in this Independent Investigation Paper 2015.

4. Accessible to police as well: Police often witness misconduct and cant report it internally.  Police should be able to complain to an independent body too.  Any independent body should be required to maintain a high level of both police and community satisfaction to secure confidence in the police accountability system.

5. Even police-related deaths need to be investigated independently: Models around the world demonstrate that independent, expert teams of non-police investigators are effective in investigating deaths caused by police. These bodies hold the trust and confidence of both police and the broader community. One example is the Police Ombudsman of Northern Ireland, where well trained staff investigate even the most serious of police misconduct.

6. Underpinned by a culture of accountability:  A culture of accountability and independence is cultivated through careful recruitment, appropriate training, the development of cultural and procedural policies and proper financing and resourcing of the institution. For practical independence to be realised, the overriding culture and decision making of an institutionally independent body’s staff (including expert, non-police investigators) cannot be dominated by deference to police.

7. It has to meet the ‘Horvath test’: If Corinna Horvath’s 1996 assault by Victoria police occurred again today,  would a new model of police investigation ensure justice or come close to meeting the requirements of the UN Human Rights Committee’s decision on Horvath.? The UN Human Rights Committee found that Australia (and by necessity Victoria), was required to ensure that police perpetrators of human rights violations are disciplined through an independent, effective and impartial complaints body.

What is the “Horvath Test”

Write and send your own Submission:

Any person or organisation can make a submission.

Your submission can include facts or opinions, recommendations or suggested solutions and personal experiences with the police complaints system.

There is no set format. It could be a letter, paper or report or you can submit to the committee directly online.

Make your submission brief and clear.

Make sure your submission is readable.

However, you may request that:

Please contact the committee to request that your submission be treated as a confidential or name withheld submission.

The committee will not disclose or publish any submission which it has accepted on a confidential basis. However, confidential evidence will be kept and, in some circumstances, may be released after 30 years.

If you would like help with your submission or have any questions please contact the Police Accountability Project at: pap@fkclc.org.au