Racial profiling occurs when police stop, question, search or detain a person because of their race.  It is a form of discrimination which violates basic human rights and causes alienation, exclusion, mental health and socio-economic impacts.

Young people of colour are still more likely to be stopped by police in Victoria than their white counterparts.

Community groups have led the call for Victoria Police to gather and publicly report on the race of the people they are stopping. Now a team of academic experts have released a report with best practice recommendations for an effective racial profiling monitoring and prevention scheme.

Please add your voice to the urgent call for a racial profiling monitoring scheme in Victoria to prevent police targeting people based on race.

Brought to you by the Police Accountability Project as part of the Without Suspicion campaign. 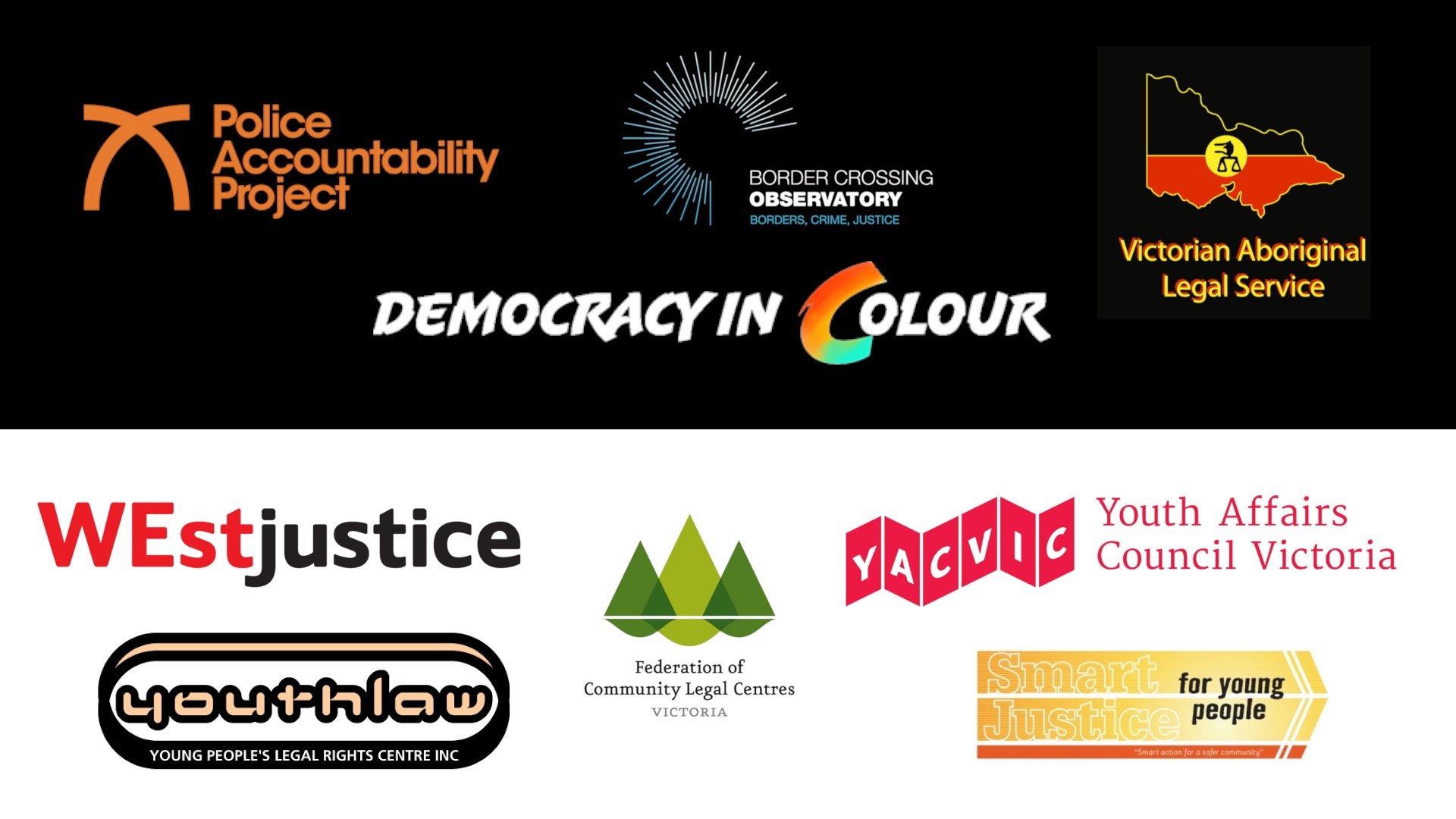 How do we stop racial profiling?

“Victoria Police have introduced policies against racial profiling, but do not have any measures in place to track ongoing race-based stops by police,” said report lead author, Tamar Hopkins. 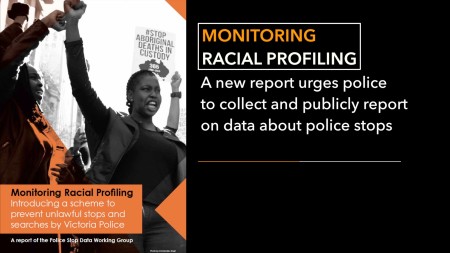 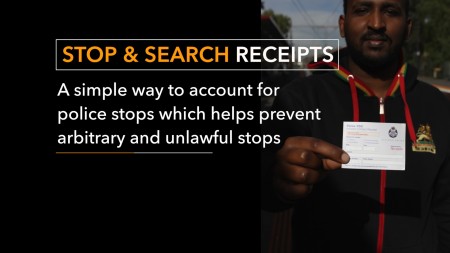 What’s the problem with Racial Profiling? 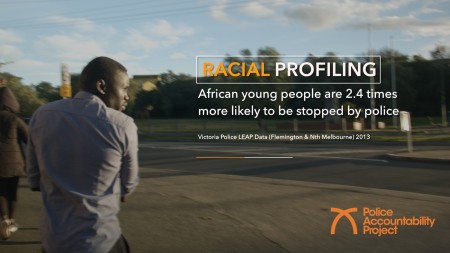 Racial profiling occurs when police stop, question, search or detain a person because of their race.

A person’s ethnicity does not make it more or less likely that they have committed or are likely to commit an offence.

Victorian Police LEAP data analysed by  eminent statistician, Professor Ian Gordon from the Univeristy of Melbourne in Haile-Michael & Ors v Konstantinidis & Ors revealed that between 2006-2009, Africans in the Flemington and North Melbourne area were 2.5 times more likely to be stopped by police than other groups despite having a lower crime rate.

The justification given for such policing rests on their supposedly high representation in local crime statistics. Yet Professor Gordon found that the same police LEAP data revealed a significant under-representation of the stopped young African Australians in the crime figures.  A summary of the findings and links to the full reports can be found here.

Read more about the harms of racial profiling here.

The Without Suspicion campaign

The Without Suspicion: towards Fair and Impartial Policing campaign is now in its fourth year.  Through this campaign we have seen in some of the most significant policing reforms in decades, maintained pressure upon Victoria Police through a careful combination of external mobilisation and internal influence, we have supported and enhanced the voices of marginalised individuals and communities most impacted by discriminatory policing.

We have raised and articulated the complex issues in the public sphere in clear and responsible ways and have placed the issues on the laps of elected representatives of two Victorian Governments now.

Victoria Police, despite all its good work and the repeated recommendations and urgings by its own expert reports, has so far failed to  implement stop data collection that can be used to track stops by ethnicity.

Your action here on this page can help Victoria Police act fairly and impartially to all Victorians.

See more about the campaign at www.policeaccountability.org.au

About the Peer Advocacy Team

The Peer Advocacy Team actively reach out to and support young people who have been impacted by discriminatory and unlawful police contact.

Building upon a successful peer outreach and legal needs analysis conducted by Daniel Haile-Michael and Maki Issa in 2015, this project supports a team of young people to take on leadership roles to educate their communities about police encounters.  It aims to empower all communities to help end racial profiling. This video is one of those initiatives. 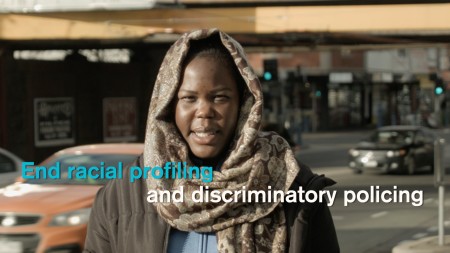 Achol is in her second year studying the Bachelor of Psychological Studies at Victoria University. She is heavily involved in many community programs from a women’s group, a university society, a youth group and African community groups. 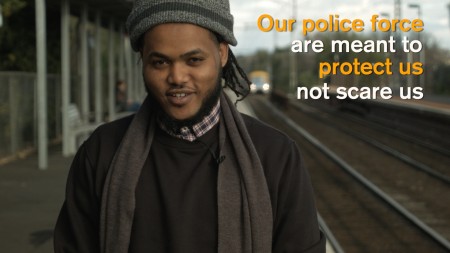 Manny was born in Ethiopia and has been in Australia for seven years.  He has nearly finished a degree in International Relations at Victoria University. 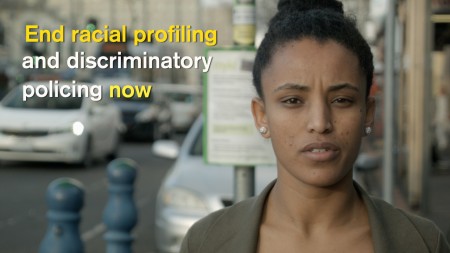 Zenab is originally from Ethiopia. She co-founded ‘Afro Society’ to provide a social capital for African students When she is not working or studying Zenab volunteers in housing services, legal advice and provides English classes to Asylum Seekers and Refugees. 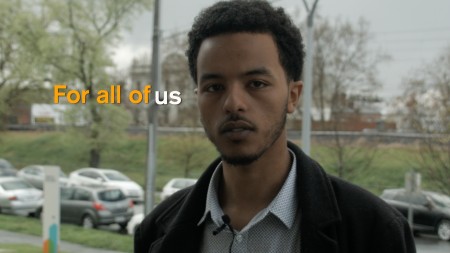 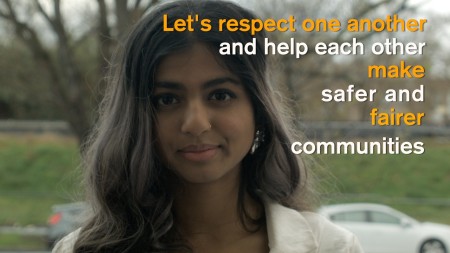 Sadja is a university student, and balances her time between studying, working, volunteering within communities and enjoying the sun. 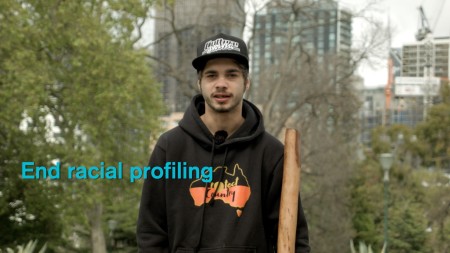 Brent is a 23 year old Gunai/ Kurni man. He is a professional artist and performer and the founder of Culture Evolves.

This one and half minute video took over 6 months to create.  The script was work-shoped by the Peer Advocacy Team members in meetings and training’s throughout May, June,and July and in online conversations until a script was eventually drafted.  We wanted it to contain all the basic impacts of racial profiling and reflect our key asks of the Without Suspicion campaign.  We wanted it to truthfully reflect the experiences of young people and their friends and speak truth in the face of the overwhelming bias and harmful stereotypes in the media.

The video was shot in and around Flemington streets and closer to the CBD but the locations could be anywhere in Melbourne. We wanted the streets to look ordinary as we get stopped everywhere, on train stations by Protective Services Officers – PSO’s, walking home or to work or going to the shops.